Weather News: Third Round of Tornadoes Coming to the South 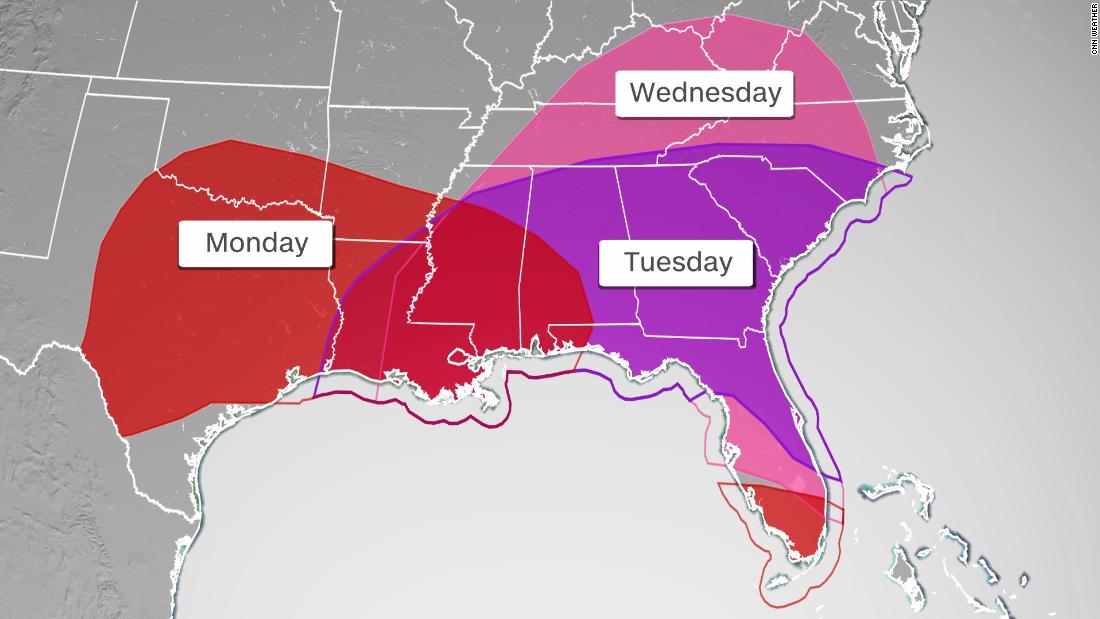 This is not only the third week in a row with the potential for severe weather, but it’s also happening in the same places over and over again.

Often, weather systems follow patterns, so this potential for severe weather in the same areas may be more common than you think.

We contacted the storm forecast center and spoke with Bill Bunting, the forecast operations manager, about the storms returning to the same areas lately.

“There’s a pretty chaotic component to the atmosphere, but sometimes it goes into patterns where we see this repeatability. We’ve seen it in all seasons,” Bunting said. “Unfortunately over the past month, and certainly for the week ahead, the threat of severe weather is going to be present again, in many of the same areas that have already experienced enough severe weather over the past four weeks. .”

He pointed out that the severe weather week after week has a strong connection to the placement of the jet stream, which creates the conditions for repetition.

“These types of weather typically feature strong southwesterly winds in the middle levels and strong southeasterly to southerly winds near the surface. This creates a natural environment for wind shear that is favorable for thunderstorms and organized tornadoes,” Bunting said.

Additionally, Bunting mentioned that very humid air flowing north from the Gulf of Mexico, which has helped storms develop over the past few weeks, is what we will see again this week.

Find out how a thunderstorm produces a tornado

This week is shaping up to be a classic weather event.

“Gulf of Mexico moisture will begin to rise northward toward the southern states and converge with the cold front moving slowly across the southern plains,” the Weather Prediction Center (WPC) wrote. “This will lead to a steady expansion of showers and thunderstorms from the southern plains into the deep south over the next two days.”

The SPC has highlighted an area with more than 10 million people at risk level 3 out of 5 for severe weather today.

The “enhanced” area includes Dallas, Shreveport and Jackson. However, even Baton Rouge, New Orleans, San Antonio and Houston could all see storms.

“Destroying gusts of wind, large to very large hail and tornadoes will all be possible,” SPC said in its statement. forecast discussion about Monday’s threat of severe weather.

On Tuesday, the threat moves east, but still includes some of the same cities as today. New Orleans, Baton Rouge and Jackson will still be under threat from severe weather on Tuesday, as the storms arrive overnight tonight through tomorrow.

But we’ll also add Montgomery, Savannah, and Charleston, which will be under a 3 out of 5 “enhanced” risk level for severe weather.

The National Weather Service (NWS) office in New Orleans was bold in its discussion of the forecast.

After two weeks of severe weather, they began by saying, “Line of sight…strong to severe thunderstorms are possible late Monday night and Tuesday morning.”

“A band of damaging wind gusts and multiple tornadoes are possible,” SPC noted in its forecast discussion.

By Wednesday, a separate system will form bringing another round of storms south and extending the severe threat for a third day.

“A second system is developing on the heels of the first as an upper trough deepens sharply and scoops across the Central Plains and possibly the Deep South,” the NWS Atlanta office said.

Wednesday’s threat will again be a level 3 out of 5 “improved” severe weather risk.

On Thursday, the threat lessens as storms push back the east coast. While the system mainly brings storms to the south, we will still see rain on Thursday across much of the east coast.

Everywhere from Florida to New England there will be rain, so we may see some travel delays at some major airports on Wednesday, and again on Thursday, as this system moves.

“Right hodographs imply a threat primarily from wind for any severe storms that develop, but care will need to be taken to monitor this event as it enters the near term,” the NWS Atlanta office said.

Hodographs are diagrams that represent the change in wind direction and speed with height.

When will the parade of storms end

It is impossible to say if this will be the last week for this region to be hit by heavy storms, or if there will be a fourth week.

“Unfortunately, there’s no real predictive skill, looking at March and saying what that portends for the rest of the season,” Bunting acknowledged. “We’ve seen instances in the past where the pattern has changed abruptly. And while we can anticipate that, it’s hard to really predict the seasonal nature of it.”

When you look at the weather picture as a whole, we see a decrease the girl“and that often results in a very busy season,” Bunting confirmed.

La Niña is an ocean-atmospheric phenomenon where colder than normal sea surface temperatures occur in the eastern Pacific near the equator.

It is impacting weather patterns around the world, even leading to a more active storm season in the South.

“So there’s a number of reasons to think the risk of severe storms isn’t going to diminish any time soon,” Bunting said, adding, “We’re entering the peak of the season.”

Sigh… Indeed, we are. Peak tornado season across the entire United States is April to June.

For the record book

While tornadoes can occur any month of the year, tornado season in the south specifically runs from March through May, so we’re just getting started.

In May and June, the tornado threat begins to move further to the southern plains including Texas, Oklahoma and Kansas.

If tornado season is already making your head spin, there’s a reason.

“No matter how you slice it, March 2022 will go down as one of the most active marches in recent memory,” Bunting said.

In fact, March set a record for the number of tornadoes.

It is the second year in a row that the country has suffered a record number of tornadoes in March, reinforcing a trend of more severe weather earlier in the year and raising questions among scientists, who have historically seen such a weather peak. of April to early June.
You can find out more here.
The severe weather in the southeast is much more dangerous than other places, mainly because many storms hit overnight while people are sleeping and have no alerts on their phones.

Also, since the southeast can be quite hilly and full of trees, you can’t see tornadoes coming in like you can in the plains.

Learn more about why Southeast tornadoes are deadlier and why scientists are studying these storms more than ever here.