Weather forecast today: Parts of the UK are set at 34C on the hottest day of the year as health warnings are issued 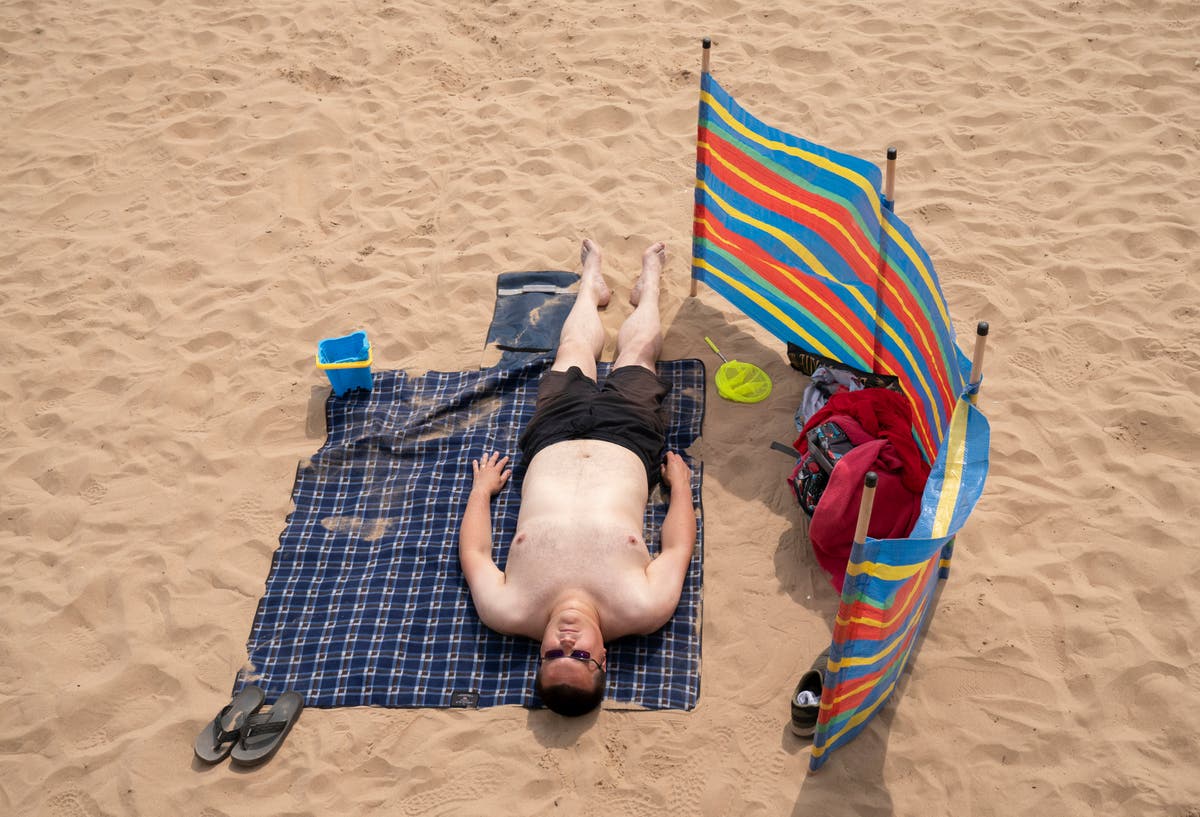 Parts of the UK are set to experience the hottest day of the year so far with temperatures peaking at 34C (93.2F) today.

The Met Office said London and parts of East Anglia are most likely to hit a sweltering 34C, while most parts of England and Wales are expected to reach 27-30C.

The UK Health Safety Agency (UKHSA) and the Met Office have issued several heat health alerts covering much of England.

A Level 3 Heat-Health alert has been issued for London, the East of England and the South East. A level 2 alert remains in place for the East Midlands and the South West.

Yesterday was confirmed as the hottest day of the year so far, a day after temperatures hit 29.3C at Heathrow and Kew Gardens in London.

The increase in hot weather over the years in the UK has been linked to climate change, with the Met Office warning that high temperatures this week were “rare” for June but have been seen repeatedly in recent years.

Glastonbury 2022 is less than a week away, with the iconic music festival set to go ahead after two years of pandemic-related cancellations.

As the festival rolls around later this month, weather experts have already predicted what the weather will be like at Worthy Farm during the five-day event.

London firefighters have warned people soaking up the sun in parks to beware of the heat sparking a fire.

In a post on Twitter, the fire department advised people to “be sure to clean bottles and any broken glass to prevent them from magnifying the sun and starting a fire”.

The Brigade also reported that 50 square meters of grass were on fire in Rainham this week.

London, the South East and possibly parts of East Anglia are expected to be the hottest, while most of England and Wales will see temperatures of 27-30C – hotter than some parts of Jamaica and the Maldives.

Although Scotland is cooler, southeastern parts of the country could see highs of 20C.

But health officials and experts have warned that vulnerable people such as the elderly and the chronically ill are at risk in the hottest areas.

Temperatures will reach 29°C this morning

London is expected to hit 29C by 11am this Friday morning as the south braces for the hottest day of the year so far.

For Scotland and Northern Ireland, the morning will bring rain and a cooler breeze.

Huge weather differences across the UK with heat and showers

The UK is set to experience a day of contrast with cooler and windier weather in Scotland and Northern Ireland, with rain moving south-east and scorching heat for most of England and the UK. Wales.

The Met Office said London and potentially some places in East Anglia will experience a temperature of 34C, making it the hottest day of the year so far.

The evening would be mostly dry with spells of summer sunshine in England and Wales, however, there is a chance of some early morning showers in southern England.

On Saturday, the Met Officer said a cooler day will prevail and there will be scattered showers across southern and central England, which could be locally heavy.

Clouds will break over Scotland and some sunny spells will develop later and there will be scattered showers in the western area.

One of two fires in New Mexico that have combined to become the state’s largest wildfire was started by the U.S. Forest Service (USFS), the agency admitted (Vishwam Sankaran writing).

The USFS said Friday that the Calf Canyon Fire started as a planned fire over the winter, but turned into a “dormant fire,” which continued to smolder unnoticed.

He said the Calf Canyon fire was caused by a “pile of burns” from branches that the agency said had burned on April 9, but reignited ten days later on April 19 and escaped. to containment lines.

Then, on April 22, the agency said a “wind event” caused the fire to spread significantly and merge the Calf Canyon Fire with the Hermits Peak Fire, which would also have been caused by an escaped planned fire.

The two fires combined to burn more than 312,320 acres (1,263 km2) of forest and mountain valleys – almost the size of Greater London, destroying hundreds of homes.

The head of the Met Office National Climate Information Center said climate change is driving the current heat wave and has increased the likelihood of more extreme weather.

Dr Mark McCarthy said: “Climate change has increased the average temperature of UK summers, and it also increases the likelihood of experiencing more extreme temperatures during heatwaves and heatwaves.

“Reaching 34°C in June is a rare, but not unprecedented, event in the UK’s historical climate record. But if it were to happen this week, it should be noted that it would have happened over three days in the last six months of June, ”he said, referring to June 21, 2017 and June 29, 2019.

The highest temperature recorded in Britain was recorded in June 1976 when the Southampton Mayflower Park reached 35.6°C.

According to consumer group Which?, expensive mineral-based sunscreens have failed testing standards for SPF and UVA and UVB protection.

The watchdog tested five SPF30 mineral products that claimed to offer a high level of protection, with three products failing the tests.

He said one of the least effective was Clinique Mineral sunscreen lotion, which costs £26 for a 125ml bottle because it provided barely a third of the SPF level claimed in tests.

However, most consumer sunscreens, known as chemical-based sunscreens, work better because they use ingredients that absorb UV rays, while mineral sunscreens physically block ultraviolet rays by using ingredients such as titanium dioxide or zinc oxide.

Hawaiian Tropic and Clinique rejected the Which? results. Green People said it was investigating further and Alba Botanica did not respond to requests for comment.

London, the South East and possibly parts of East Anglia are expected to be the hottest, while most of England and Wales will see temperatures of 27-30C – hotter than some parts of Jamaica and the Maldives.

Health officials and experts have warned that vulnerable people such as the elderly and the chronically ill are at risk in the hottest areas.

Firefighters warn of increased fire risk due to ‘reckless’ barbecues

Firefighters across the UK have warned of an increased risk of fires due to the heat wave.

The London Fire Brigade (LFB) said they have already seen more than 1,430 grass and open ground fires across the city this year.

Fire Safety Brigade assistant commissioner Charlie Pugsley said they weren’t against people taking advantage of the good weather, but urged them to do so safely.

“Barbecueing on dry grass is unwise and can easily cause a very serious fire – damaging the immediate area and endangering nearby properties.

“We are also urging people to think twice before having balcony barbecues.

“It’s easier than you think for a balcony fire to spread to others, which could not only leave you homeless, but also displace hundreds of your neighbours.

“We’re not trying to take the fun out of the heat wave, but for the sake of our city – and our firefighters who have to work in sweltering temperatures to fight these fires – we’d really like people to follow our board advice. .

“We ask the public to remain vigilant and to call 999 as soon as they see any signs of smoking weed.”