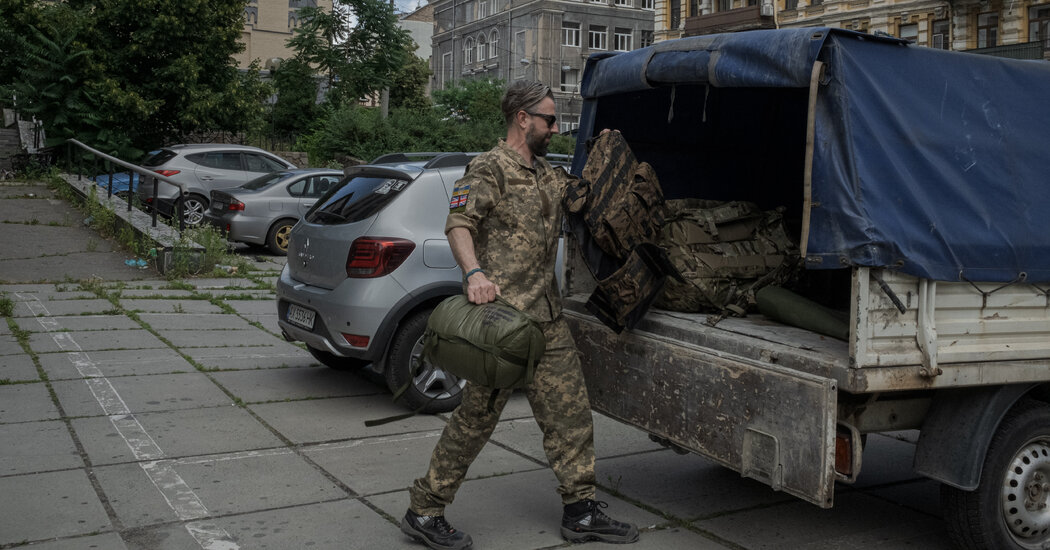 LVIV, Ukraine – Artemiy Dymyd’s closest friends unpacked his parachute and laid it gently on his grave. The silky red cloth swaddled his coffin as he was lowered.

The men, themselves many soldiers, covered the freshly dug hole with earth. The first shovelfuls landed with a crash.

The funeral of Mr Dymyd, a sailor killed in action, was the first funeral of the day in Lviv, a city in western Ukraine where residents have seen a relentless stream of their sons killed in the war with the Russia. By the end of Tuesday, three other freshly dug graves near Mr Dymyd’s would also be filled with young soldiers who died in action for the east of the country, hundreds of miles away.

The funeral had begun in a Greek Catholic church, an eastern branch of Catholicism widespread in Lviv. Mr. Dymyd’s father, a priest, gave his eulogy. And then his mother, her voice charged with emotion, sang one last lullaby for her son.

The procession then made an all-too-familiar route from the church to the town’s main market square, where dozens of youngsters in Boy Scout uniforms formed a guard of honor. Mr. Dymyd, 27, had been part of the Ukrainian Scout organization since he was 7 years old. The young children, teenagers and adults of the group were there to say a last goodbye.

At the bottom of the square, four white placards announced details of the military funerals to be held in the city on Tuesday, all for men killed in the battle for the east of the country in recent weeks. Three of them never reached their 30th birthday.

A young woman, wearing the distinctive green Boy Scout sash, closed her eyes, took a sharp breath, and clenched her fists to hold back tears as she joined Mr. Dymyd’s slow procession.

Scouting was just a part of his life. Mr. Dymyd also loved travel and adventure, as well as extreme sports like skydiving. His nickname was Kurka, which means chicken. Friends said Metallica’s music would have been more appropriate for his funeral than the military funeral songs that now play daily at Lviv’s Lychakiv Cemetery.

“He’s one of the most honest men I’ve ever met,” said 26-year-old Dmytro Paschuk. “He lived many lives in his 27 years. People write books about characters like him, and maybe there will be books soon.

Mr. Paschuk, who ran a wine bar before the war, served alongside Mr. Dymyd in a special operation unit of the Ukrainian marines. They had become like brothers over the past few months, he said.

On the night of the attack that ended his friend’s life, Mr Paschuk said, he woke up to the sound of an explosion and soon realized something was wrong. He immediately looked for Mr. Dymyd and saw that another friend was giving him first aid. When he saw Mr. Dymyd’s eyes, he knew it was bad.

“I was afraid to be next to him,” he said slowly. “Because when I saw him, I felt he wouldn’t make it.”

Mr Paschuk said he had mixed feelings about returning to the front lines in a few days. He described waves of emotion, but he said he was neither angry nor vengeful.

“I don’t feel like I want to kill everyone because it happened,” Mr Paschuk said. “Thanks to Kurka. He taught me to stay calm.

Roman Lozynskyi, another Marine, had been a friend of Mr. Dymyd for two decades, having met him when they were young scouts. Mr. Lozynskyi, who is a member of Ukraine’s parliament, volunteered for the army three months ago and served in the same unit as Mr. Dymyd and Mr. Paschuk.

He described his lifelong friend as a “crazy man” with a thirst for life who had returned to Ukraine from a parachute trip to Brazil to enlist when the war started. Mr Dymyd wanted to continue parachuting during the war and finally got a chance last month on a mission, his friends said.

It was Mr. Dymyd’s brother, Dmytro Dymyd, who thought of placing the parachute in his grave, Mr. Lozynskyi said, in a nod to Mr. Dymyd’s passion for the sport of skydiving. The brother, who is also a soldier, was allowed to attend the funeral but will return to the Donetsk region in a few days.

As mourners slowly left the cemetery, gravediggers tamped the earth over Mr Dymyd’s grave into a solid mound.

There were still three to go.