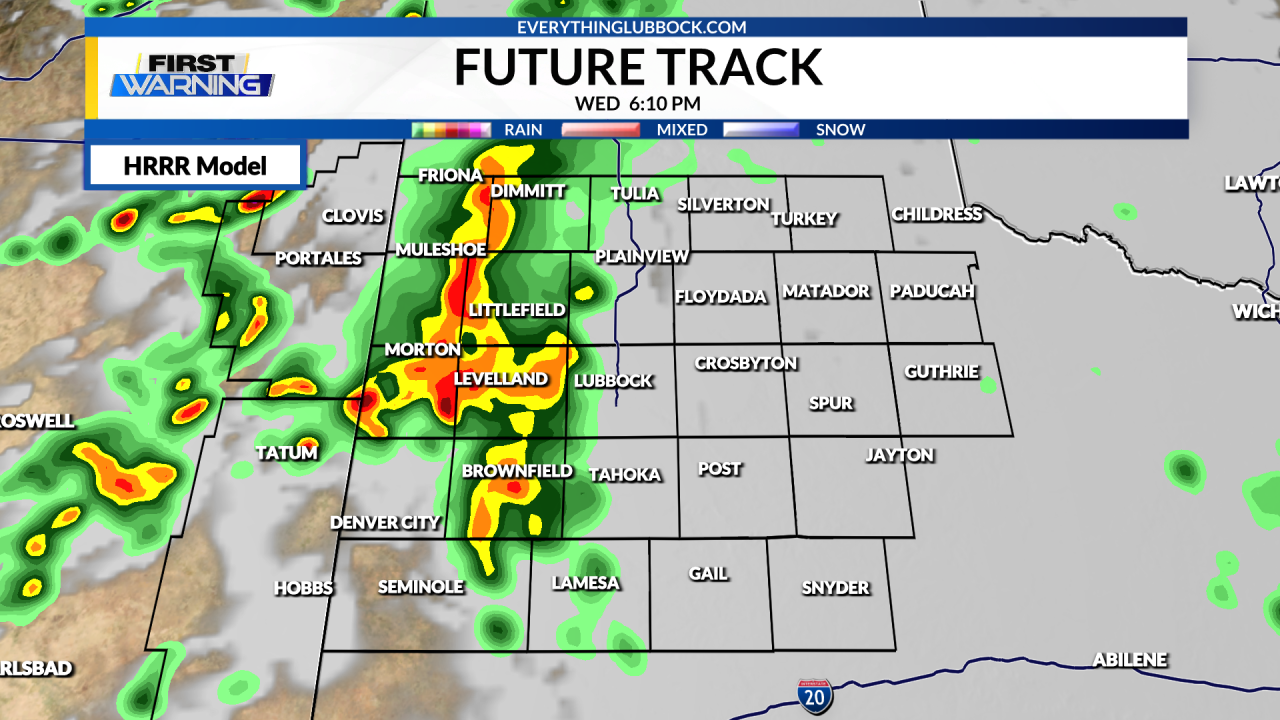 Spurious showers or storms will be possible in eastern New Mexico this evening, especially before sunset. Other than that, a calm and balmy night is expected at the KLBK viewing area. We will keep partly cloudy skies around the region, with southerly winds around 10-15 MPH. By sunrise on Wednesday, temperatures will settle into the 60s.

High temperatures are expected to peak near average on Wednesday. The highs will warm in the 80s to 90s with the hottest temperatures occurring off the caprock across the rolling plains. Winds will be sustained around 15-20 MPH from the south. Showers and isolated thunderstorms will begin to develop in eastern New Mexico around 2 p.m. Showers and thunderstorms will most likely be west of the Interstate 27/Highway 87 corridor. Some areas could receive around 0.50″-0.75″ of precipitation! Some storms could produce gusty winds over 65 MPH. Scattered showers and thunderstorms will remain possible overnight through early Thursday morning. The lows will bottom out in the upper 50s to low 70s.

One or two isolated showers will remain possible on Thursday, so we will keep a 10% chance of rain in the forecast for now. Most areas should remain dry. The highs will remain stable, warming up on either side of 90°! Winds will be southerly around 12-18 MPH under partly cloudy skies. Thursday night through Friday morning will be calm and dry, with temperatures dropping into the 60s and 70s.

A dry, hot and windy day is expected in the forecast area on Friday! Peaks will climb in the mid-80s to mid-90s, with cooler temperatures in eastern New Mexico. Sustained wind speeds will come from the south around 12-18 MPH. Friday night through Saturday morning will remain balmy with lows dipping between the 60s and 70s.

Long term forecast:
This weekend promises to be dry and hot in the southern plains. Highs will be in the mid 80s to mid 90s under mostly sunny skies with morning lows in the mid 60s to low 70s. We will still be warm on Monday with highs near 90°. By Tuesday, clouds will begin to build in the region as our next potential storm system approaches from the west. This could bring a few more showers and storms by the middle of next week, but there is still a lot of uncertainty with the overall pattern of this system. Your KLBK First Warning weather team will be sure to keep you updated on Facebook, Twitterand right here at everythinglubbock.com.

Have a wonderful Wednesday, South Plains!