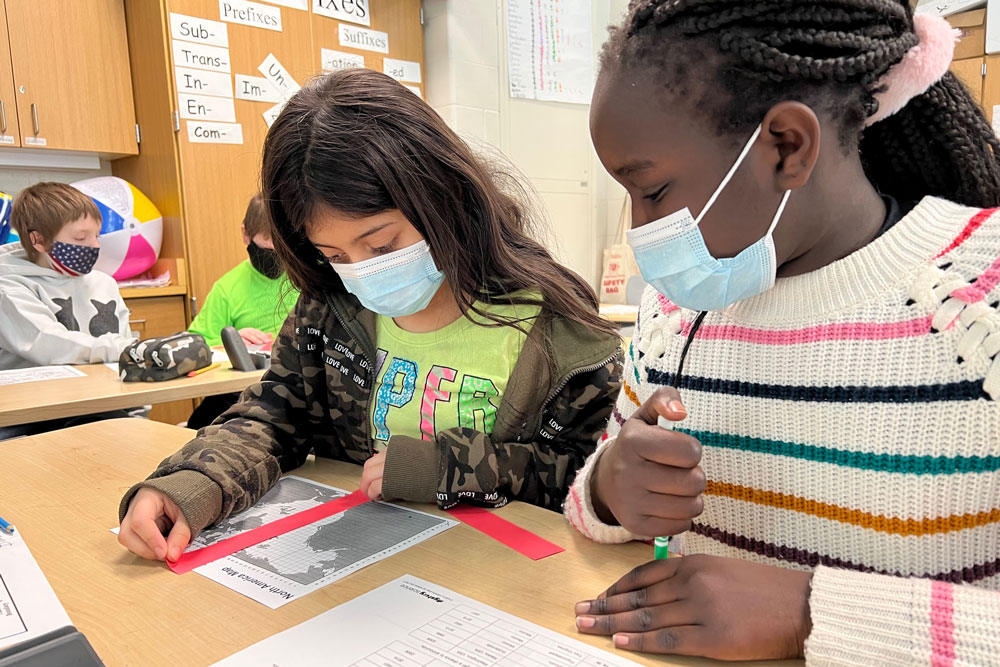 Kent Wood — From charting the downward trend in temperatures from August to February to tracking erupting volcanoes all over the world, grade four students at Southwood Elementary School observe the patterns and make observations.

Studying patterns helps teach science, math, reading and connecting between subjects, said teacher Maureen Kaczanowski, as her students worked in pairs at their desks to graph volcanoes such as Kilauea in Hawaii and Mammoth Mountain in Mono County, California. The X and Y axis points revealed a common occurrence and Grade 4 student Cayden Lopshire commented on the diagram.

“A lot of them are on the edges of tectonic plates,” Cayden said, as her classmates used their index fingers to track the points of eruptions along the edge of South America on their map sheets. work.

Students have learned about volcanoes in previous years while studying the models as part of fourth-grade science standards. But that wasn’t relevant enough, Kaczanowksi said, so this year she added a year-round weather project.

“Volcanoes aren’t really something Michigan kids can relate to. They’re cool, but they can’t really identify with them. We decided that introducing weather would help us understand the patterns,” she said.

So after the volcano charting activity, Kaczanowski seamlessly began the daily weather lesson, as the students reviewed the temperatures they had tracked throughout the school year, the meteorologists explained. classmates, Kaleb Rubante and Olivia Daniels.

Every day they check the outdoor thermometer and sometimes go out to measure the snow – “I’ve reached 17 inches!” says Olivia. Then they head to a large calendar to note the temperature and weather conditions.

Southwood received a bosch grant materials and tools to establish the weather station, including anemometers (to measure wind speed), barometers, thermometers, and books on weather and weather-related careers.

Students regularly plot daily temperatures on graphs posted on the wall, which now show a zigzag dip from scorching August days in the 80s and 90s, to freezing January readings in teens. At the end of the school year, students will see how the temperatures rise.

The goal is for students to examine the patterns of data they collect and learn how to draw conclusions and predictions from it, Kaczanowski said.

“I noticed it can get really cold,” Kaleb said. He also achieved something often seen by Michiganders. “I’ve noticed that it can go really high one day and the next day it’s really, really cold.”

“I noticed that the snow can get really deep,” added Olivia.

Kaczanowski also plans for his students to use rain gauges, study the phases of the moon and build solar cars.

Once her class collects data each year, they will have years of graphs to compare models over time. Kaleb thinks it’s exciting and plans to check things out next year when he’s in fifth grade.

“I’d like to see how the weather changes from September this year to next year. We go out for recess that way, so I’ll probably stop and watch.