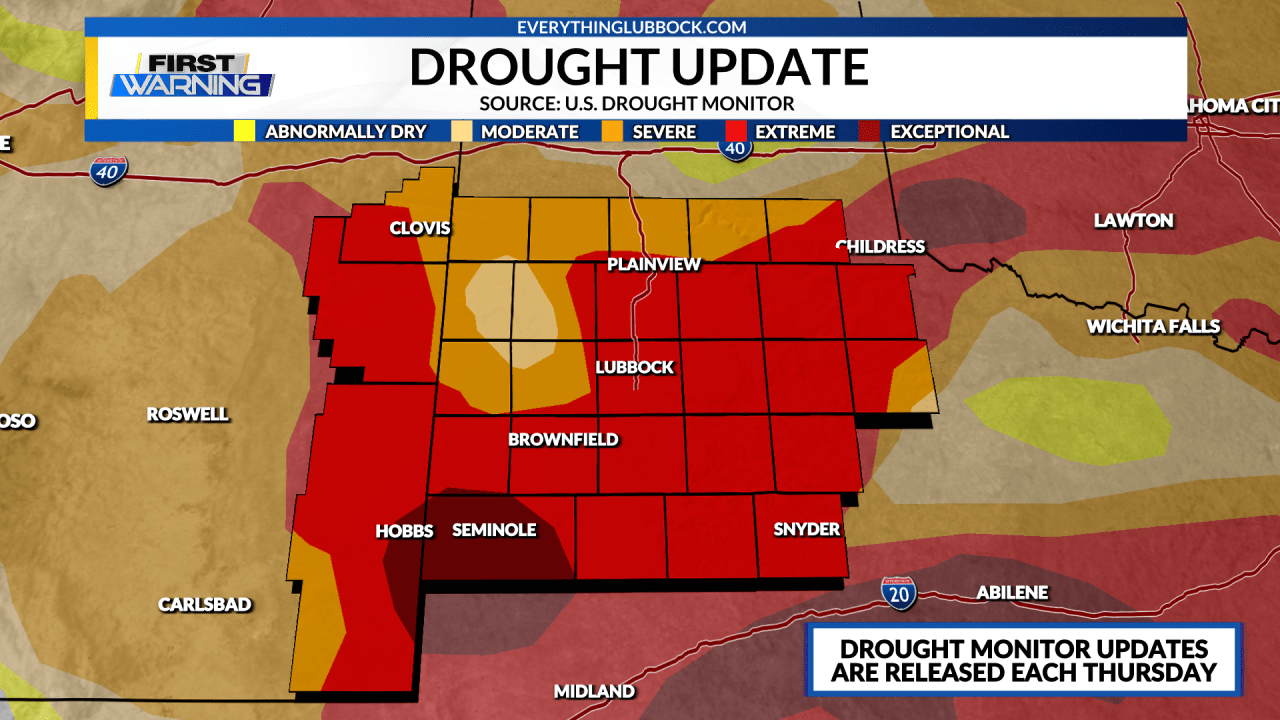 We will keep some clouds around the area tonight with calm southeasterly winds around 5-10 MPH. Temperatures are expected to bottom in the upper 50s to upper 60s at sunrise Friday, with partly cloudy to mostly clear skies across the region.

A stray shower or two cannot be completely ruled out in the southern plains for our Friday. However, these showers will be very small in size and isolated in nature. Rain cover will remain below 10%, so honestly it’s not even worth mentioning. We will keep partly cloudy skies around the region, with southeasterly winds around 12-18 MPH. High temperatures will peak in the mid 80s to low 90s across the region. Friday will be the perfect start to high school football in Eastern New Mexico and Western Texas! We have a lot of great games going on across the region. Around 7:00 p.m. kick-off time, temperatures are expected to be in the mid to high 80s under mostly sunny to partly cloudy skies. Winds will be from the southeast around 5-10 MPH. From Friday evening to Saturday morning, it will be a typical late August night throughout the region. Lows drop into the 60s to 70s at the Saturday morning low.

Showers and isolated storms will increase in coverage of the KLBK viewing area Saturday and Sunday. The best chance of rain will exist over the western and northwest regions each afternoon and evening. High temperatures each day will be slightly warmer, peaking in the upper 80s to mid 90s. Partly cloudy skies can be expected each day, with more clouds likely later in the day. Isolated rainfall totals around 0.10″-0.20″ will be possible for some. Widespread heavy rainfall is not likely this weekend. Our overnight hours are expected to remain dry, with morning lows reaching the low 60s to mid 70s each morning.

Long term forecast:
Early next week our next cold front begins to move into the southern plains. The risk of storms increases on Monday, with widespread rainfall of 0.25″-0.50″ possible for most of the region. Later in the week, the chance of rain shifts to the southern and eastern portions of the viewing area. In addition to the rain, cooler temperatures are expected to return to the region. Highs will return to the mid 70s to mid 80s next week with the coolest air arriving after Tuesday. Morning lows will be back to the 50s for some, with the coldest air possible since early June by Thursday morning! Be sure to stay with the KLBK First Warning weather team for updates throughout the weekend.

Drought update:
Today’s drought monitor update showed decent improvement in the southern plains thanks to last week’s rain! The northern half of our region dropped an entire category. Parts of Bailey, Lamb, Hockley and Cochran counties have seen drastic improvement due to very heavy rain! Last week, about 1/3 of the viewing area of ​​KLBK was under the exceptional drought level D4, which is the highest drought level. This week, only a small portion of our southwestern regions are included in this drought category!

Have a fantastic Friday, South Plains!