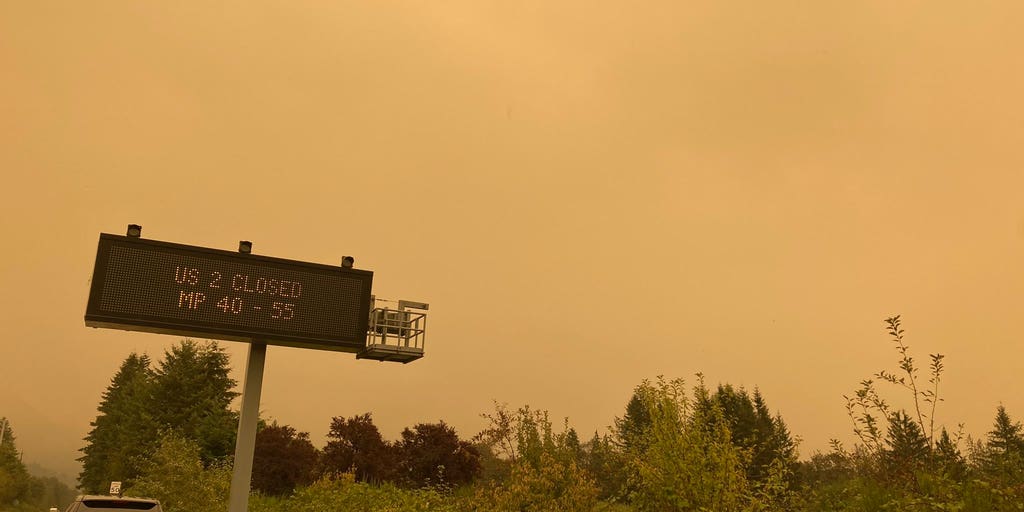 In addition to the heat risk, dangerous fire weather is possible this weekend for the Oregon and Washington coasts, with broad fire weather warnings issued. The fire threat will be driven by abnormally strong winds coming down the Cascade Ridge. Wind gusts of 50-70 mph will be possible at higher elevations and up to 40 mph at lower elevations.

Views of ash and smoke greeted residents of Washington and Oregon as more than a dozen large fires burned through the Pacific Northwest wilderness on Saturday.

The combination of low humidity, gusty winds and dry conditions created conditions conducive to the rapid spread of the fires.

More than 5,000 firefighters are working to control the large fires that have destroyed more than a quarter of a million acres.

Smoke and ash were reported from Seattle to Portland as east to south winds drifted plumes from the fires toward populated communities.

Air quality alerts have been issued for several counties in the region due to readings in the unhealthy range. The National Weather Service has advised residents near Seattle to stay indoors, avoid strenuous activity and close windows and doors because of the heavy smoke.

The Northwest Interagency Coordination Center works at least 15 large fires throughout the region.

16 large fires are burning in the Pacific Northwest

The fires of most concern to Incident Command teams include Cedar Creek, Double Creek and Boulder Mountain and the new Bolt Creek Fire.

The NICC reports that the fire has burned more than 51,000 acres and is 12% contained.

Most of the blazes are burning inside the Willamette National Forest, but private lands are at risk in the western part of the state.

An estimated 1,900 homes were placed on evacuation notices as firefighters were only able to contain around 12% of the blaze.

Thunderstorms in early August are believed to have produced lightning which started the fire. The US Forest Service said about 20 to 30 new fires broke out due to the storms.

Oregon Governor Kate Brown declared an emergency on Friday to help mobilize sources for the fire burning in Lane County.

“The Cedar Creek Fire has been rapidly expanding into communities across Oregon this morning, and the potential for fire growth in the coming days is unsettling, requiring additional resources to fight the fire and support the state response,” Governor Brown said in a statement.

The largest fire of the year in the Pacific Northwest has consumed more than 147,000 acres in eastern Oregon along the Snake River.

Officials say between 100 and 200 homes are at risk and the fire is burning near the community of Imnaha.

Similar to the Cedar Creek Fire, August thunderstorms that produced lightning are blamed for starting the blaze.

Nearly 800 people are working to bring the blaze under control and, at last report, it was only about 15% contained.

The Boulder Mountain Fire is burning in the northeast corner of Washington state, and the NICC says it’s another example of triggered lightning.

Due to the rural nature of the fire, only 24 structures are at risk, but crews managed to control the wildfire.

Nearly 2,000 acres have burned and the official containment is said to be around 8%.

A mix of state, federal and private land is affected, and firefighters have reported difficulty fighting the fire due to the terrain and heavy wood.

The Boulder Mountain Fire is burning in northeast Washington.

The Washington State Department of National Resources said firefighters are in structural protection mode for a fast-moving fire that broke out east of Seattle on Saturday.

Authorities estimate the Bolt Creek Fire has burned more than 2,000 acres and is zero percent contained.

Evacuations have been ordered around the town of Skykomish by the King County Sheriff’s Office.

First responders said at least 300 homes were threatened by the fire.

So far, no word on what started the initial flames.

Much of California gets a reprieve from the wildfires

CAL FIRE Reports the Fairview and Fork fires in the southern and central parts of the state are at moderate containment levels.

One fire that continues to spiral out of control and threaten homes is the Mosquito Fire in the Tahoe National Forest.

Firefighters report over 33,000 acres have burned and there is no containment.