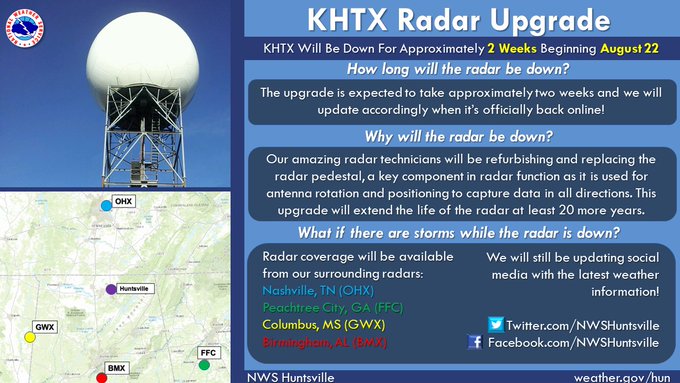 HYTOP, Ala. (WDEF) – The two primary radars that cover the majority of News 12’s viewing area are currently offline as the National Weather Service (NWS) performs scheduled maintenance to improve their lifespan.

The NWS Huntsville Radar in Hytop, AL in Jackson County and the NWS Morristown Radar at their office in Morristown, TN outside of Knoxville were taken offline yesterday and will be down until the end of the next week as they replace a large portion of their WSD-88 radars.

The NWS office in Huntsville says it will “replace the radar pedestal, a key part of the radar function as it is used to rotate and position the antenna to capture data in all directions.” This upgrade will extend the life of the radar by at least another 20 years.

Hytop Radar in particular is important for the Tennessee Valley because it is approximately 45 miles southwest of downtown Chattanooga, providing detailed radar coverage for the vast majority of the News 12 viewing area. Proximity can detect wind speed, rotation, and hail, among other severe weather events low in the atmosphere, which helps NWS meteorologists issue weather warnings. Morristown Radar provides another angle primarily for areas north and east of Chattanooga.

While the radars are down, NWS Huntsville and NWS Morristown meteorologists will use adjacent radars to help them continue to monitor the weather with satellite imagery. For the News 12 viewing area, the closest speed cameras are located in the Nashville, Birmingham and Atlanta areas.

Since these radars are further away, they will not provide such a detailed picture since the radar beams travel through the atmosphere as they move away from their radar site, missing what is happening at lower levels of the atmosphere. The Hytop and Morristown radars are expected to be operational again by next Friday, September 2, during which time they will continue to provide critical weather data for the Tennessee Valley and help meteorologists issue vital warnings.