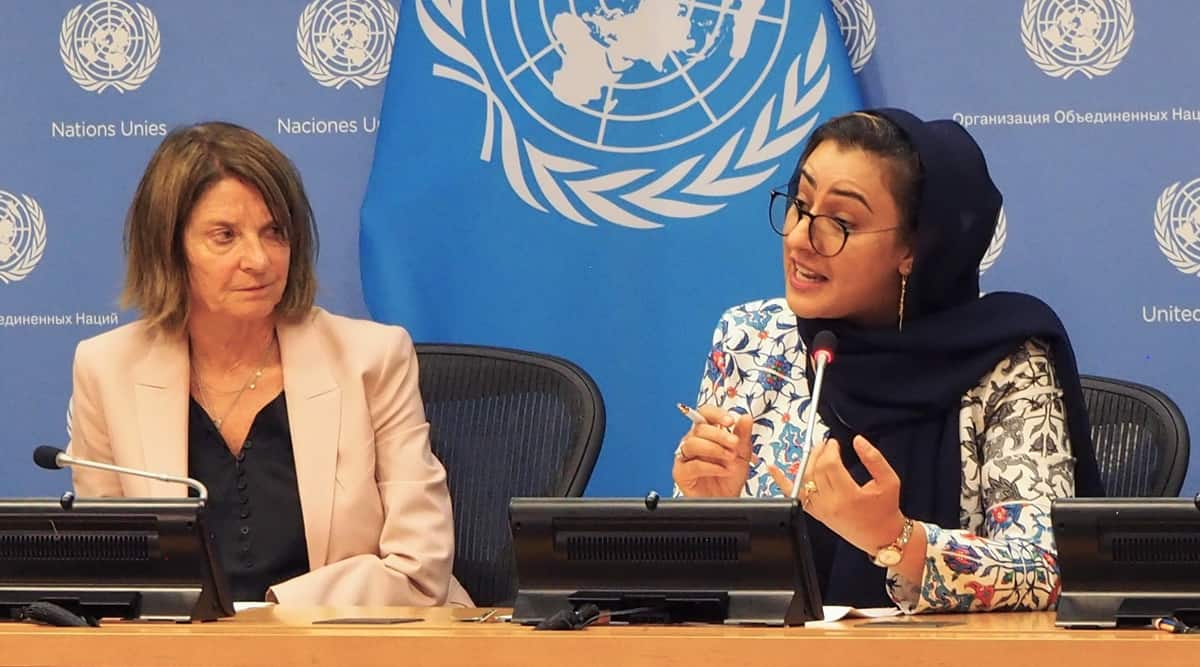 Naheed Farid, a women’s rights activist who was the youngest politician elected to parliament in 2010, told a UN press conference that due to severe restrictions on women’s movements, the end secondary education for girls and the banning of jobs for women, “I hear more and more stories of Afghan women who choose to end their lives out of desperation and desperation. “This is the ultimate indicator of how bad the situation is for Afghan women and girls – that they choose death and that it is preferred to them over living under Taliban rule,” she said.

Farid, now at Princeton University’s School of Public and International Affairs, said she was not the first person to call the Taliban a “gender apartheid” regime, but she said that ” the inaction of the international community and decision makers in general makes it important for all of us to repeat this” so that the voices of women in Afghanistan who cannot speak are not forgotten.

She expressed hope that world leaders gathering next week for their annual meeting at the United Nations General Assembly would take the time to meet and listen to Afghan women living in exile, and begin to understand that ” gender apartheid” is happening in Afghanistan because women are being “used”. and misused”, relegated to lower levels of society and deprived of their human rights by the Taliban.

When the Taliban first ruled Afghanistan from 1996 to 2001, women and girls were subject to crushing restrictions – no education, no participation in public life and women were required to wear the burqa universal.

After the ousting of the Taliban by US forces in 2001 following the 9/11 attacks in the United States, and for the next 20 years, Afghan girls were not only enrolled in school, but in university, and many women have become doctors, lawyers, judges, members of parliament and business owners, traveling without face coverings.

After the Taliban invaded the capital on August 15, 2021, as US and NATO forces were in the final stages of their chaotic withdrawal from Afghanistan after 20 years, they promised a more moderate form of Islamic rule, in particular by allowing women to continue their studies and to work outside. the House. They initially announced no dress code, although they also vowed to enforce Sharia, or Islamic law.

But the Taliban’s hardliners have since turned the clock back to their harsh former rule, confirming rights activists’ worst fears and further complicating the Taliban’s relationship with an already wary international community.

Farid accused the Taliban of using women as “bargaining chips” to demand legitimacy, funds and aid from the international community. She called this “very dangerous” because the full rights of Afghan women and girls must be a non-negotiable starting point for all negotiations with the Taliban.

Farid called on the Organization of Islamic Cooperation, made up of 57 Muslim nations, and other countries to create a platform for Afghan women to negotiate directly with the Taliban on women’s rights and human rights. She also urged countries to maintain sanctions against the Taliban, keep the 183 Taliban leaders on the UN sanctions blacklist, ban Taliban representatives from the United Nations and include women in all delegations meeting with Taliban.

Norway’s UN ambassador Mona Juul, whose country oversees Afghan issues at the UN Security Council and hosted the press conference, said that a year after the Taliban took power, ” the situation of women and girls has deteriorated at a shocking scale and speed”. As an example, she said Afghanistan is now the only country in the world to ban girls from going to school beyond the sixth grade.

Najiba Sanjar, a human rights activist and feminist, said she was speaking out for the voices of 17 million Afghan girls and women who currently have no voice.

“We all watch the suffering of women, girls and minorities on our television screens as if an action movie is happening,” she told reporters. “A real form of injustice is unfolding before our eyes. And we all silently watch and participate in this sin by remaining complacent and accepting it as a new normal. She pointed to a recent survey of women in Afghanistan which found that only 4% of women said they always had enough food to eat, a quarter of women said their income had fallen to zero, domestic violence and femicide increasing, and 57% of Afghan women married before the age of 19. She also cited families selling their daughters and belongings to buy food.

Sanjar urged the international community to exert all possible pressure on the Taliban to protect the rights of women and minorities to education and work while refusing diplomatic recognition.

“Because women’s rights are human rights, what is happening is already alarming for all women in the world,” she said.