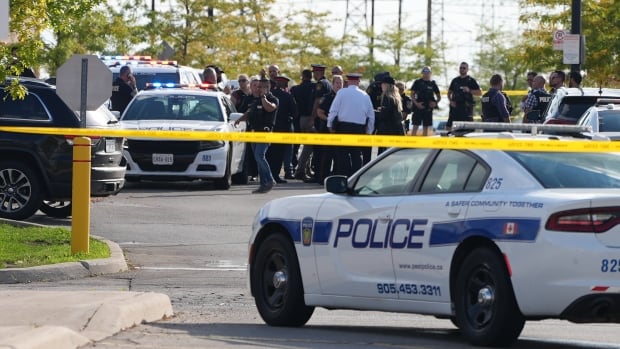 A suspect is dead after separate shootings in Mississauga and Milton on Monday left two people dead, including a Toronto police officer, and three others injured, according to police and Ontario Premier Doug Ford.

In a tweet, Ford confirmed the death of the Toronto police officer, saying he was “horrified by the senseless violence today.”

“I am so grateful to law enforcement for bringing this to an end. May justice for those killed and injured be swift,” Ford said.

Like all Ontarians, I am horrified by the senseless violence today, including the murder of a Toronto police officer.

I am very grateful to law enforcement for putting an end to this situation. May justice for those killed and injured be swift.

Hamilton Police Chief Frank Bergen said a person was shot and pronounced dead in the Hamilton cemetery in connection with the shootings in Peel and Halton Regions.

The shooting occurred in the back part of the cemetery. The person was taken into custody and declared dead. The Ontario Special Investigations Unit invoked its mandate.

Peel Police have identified the suspect as 30-year-old Shawn Petry. Police told reporters in Mississauga they were withdrawing the alert.

“There is no longer a threat to the safety of the police,” said Const. Heather Cannon said near the Mississauga shooting scene.

The Mississauga shooting occurred in the area of ​​Argentia Road and Winston Churchill Boulevard. Police were called to the scene at 2:15 p.m.

In a tweet at 3.25pm, Halton Police said they closed Bronte Street South from King Street to Main Street for a shooting investigation.

Halton Police said in a tweet about an hour later that three people were shot in Milton. Police said one of the victims died and the other two were taken to hospital.

Milton District Hospital was put on hold and secured because there was police activity nearby, but the hospital says the order has been lifted and its emergency room remains open.

Both police forces had tweeted that they were looking for a vehicle with the registration number CLMZ 905.

Peel Regional Police had described the suspect as black, with a slim build, dark hair and wearing a black and yellow construction vest.

In a tweet, Ontario’s Special Investigations Unit (SIU) said it invoked its warrant regarding a shooting involving a Halton Regional Police Service officer on Monday afternoon on York Boulevard in Hamilton.

SIU spokesperson Kristy Denette said the agency is heading to Hamilton and is expected to provide an update Monday evening.

The SIU is called upon to investigate police conduct that has resulted in death, serious injury or allegations of sexual assault.

In a melee, Hamilton’s police chief said he wanted to ‘reassure the public that there is no longer a risk’. Bergen said no Hamilton officers were injured and he did not say whether the shot person was armed.

Toronto, Peel, Halton, Hamilton and the Ontario Provincial Police were all involved.

Shortly after 4 p.m., Hamilton police were notified that the suspect was heading into town, and shortly after the shooting occurred.

Bergen declined to say which officer shot the suspect, but said Hamilton police were involved.

All resources were put into play in five jurisdictions, he added. York Boulevard near Highway 403 remained closed in both directions as of 6:30 p.m.

UPDATE :
-Suspicious photo
-The man is armed and dangerous
-Do not approach the 9-1-1 call pic.twitter. com/rGWxXCg24Y

UPDATE: The suspect has been located and is in custody. 1 person was pronounced dead at the scene and 2 others were taken to hospital.