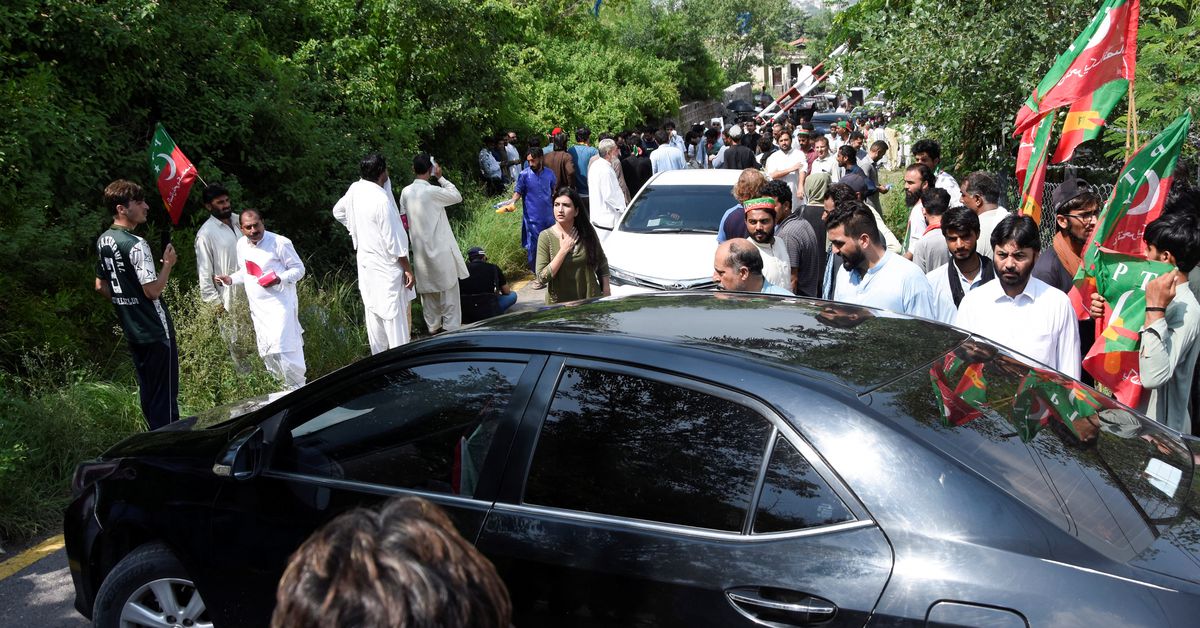 ISLAMABAD, Aug 22 (Reuters) – Supporters of former Pakistani Prime Minister Imran Khan gathered outside his home on Monday to prevent police from arresting him on terror charges linked to a weekend televised speech.

Police filed charges against former cricket star Khan on Saturday over what they said was a threat in the speech in which he spoke about the police torture of an aide who faces sedition charges for incitement to mutiny in the army. Read more

“We won’t spare you,” Khan said in the speech, in which he named the police chief and judge involved in the case against his aide. “We will pursue you.”

Police cited the comment in a report seen by Reuters.

“The purpose of the speech was to sow terror among the police and the judiciary and to prevent them from doing their duty,” the police said in the report.

Dozens of supporters gathered outside his home on Monday chanting slogans against the government and the police.

“I had called to take legal action against them (police and magistrate),” Khan said, adding that the government had nonetheless registered a terrorism case against him.

“All these things show that we have no rule of law in Pakistan,” he said, adding that he had 16 cases against him, in addition to this latest terrorism case.

“They’ll have to crush us before they can get to Khan,” said a Sher Jahan Khan supporter outside Khan’s hilltop house overlooking the capital, Islamabad.

Supporters of former Pakistani Prime Minister Imran Khan block a road with a car, as they gather to prevent his arrest on anti-terrorism charges, in Islamabad, Pakistan August 22, 2022. REUTERS/Waseem Khan

“If Imran Khan is arrested…we will take control of Islamabad with people power,” threatened a former minister in Khan’s cabinet, Ali Amin Gandapur, in a post on Twitter.

Later in the day, a court granted Khan three days’ bail before his arrest, Khan’s lawyer, Babar Awan, told reporters, after which protesters began to disperse.

Khan served as prime minister from 2018 until April this year, when he was forced to resign after losing a confidence vote in parliament. Since then, he has been campaigning for new elections.

Khan appeared at the main gate of his home to greet his supporters, according to a tweet posted on his Pakistan Tehreek-e-Insaf (PTI) party’s official page.

Khan was unavailable for comment, but Fawad Chaudhry, a spokesperson for the PTI, dismissed the charges against Khan as politically motivated, telling reporters they were being used to prevent Khan from leading anti-government rallies.

The use of anti-terrorism laws as the basis for prosecutions of political leaders is not uncommon in Pakistan, where the Khan government has also used them against opponents and critics.

Khan came to power with what political analysts said was backing from the military, and he won the election on a conservative platform that appealed to many middle-class and religious voters.

But analysts said Khan fell out with the army after a dispute over the appointment of a chief spy.

Khan has denied ever receiving military support and the army, which has ruled the country for more than three decades of Pakistan’s 75-year history, denies any involvement in civilian politics.