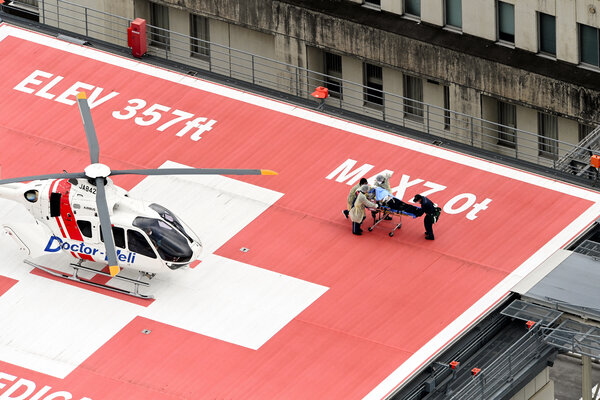 TOKYO — Shinzo Abe, the former prime minister of Japan, was in critical condition after he was shot Friday morning while delivering a speech in western Japan, according to Prime Minister Fumio Kishida.

Footage circulating on social media showed Mr Abe, 67, collapsed and bleeding to the ground in the city of Nara, near Kyoto. Japan’s Fire and Disaster Management Agency said Mr Abe was shot in the right neck and left chest.

Police said they arrested a suspect, Tetsuya Yamagami, on a charge of attempted murder. The suspect had used “firearm-like equipment”, which was recovered from the scene, a police spokesman said.

Footage shared on social media shows a man tackled after the shooting near Yamatosaidaiji station. The man was a resident of Nara, according to NHK, the public broadcaster. The detailed motive for the shooting was not immediately made public.

Mr Kishida, who was campaigning in Yamagata prefecture and returned to Tokyo after the shooting, told a news conference that the attack had been a “heinous act”, adding: “It is barbaric and malevolent, and that cannot be tolerated.”

He added: “Right now doctors are doing everything they can. Right now, I hope and pray that former Prime Minister Abe survives this.

Seigo Yasuhara, an official from the Nara Fire Command Center, said after the shooting Mr Abe went into cardiorespiratory arrest and was taken by an ambulance – unconscious and showing no vital signs – to a medical evacuation helicopter. . He was then taken to Nara Medical University Hospital, Nara Fire Department said.

Hirokazu Matsuno, chief secretary to Prime Minister Kishida’s cabinet, said a crisis management center had been set up within the prime minister’s office.

The former prime minister was in Nara campaigning ahead of elections for the Upper House of Parliament scheduled for Sunday. Mr Abe was giving a campaign speech on behalf of Kei Sato, 43, a current member of the Upper House running for re-election in Nara. He had been talking for less than a minute when two loud explosions sounded behind him around 11:30 a.m.

Mr Abe fell from a small 20-inch stand, where he had been perched so he could rise above the crowd.

“I didn’t know what happened,” Ogita said in a phone interview on Friday afternoon. “I saw him collapse.