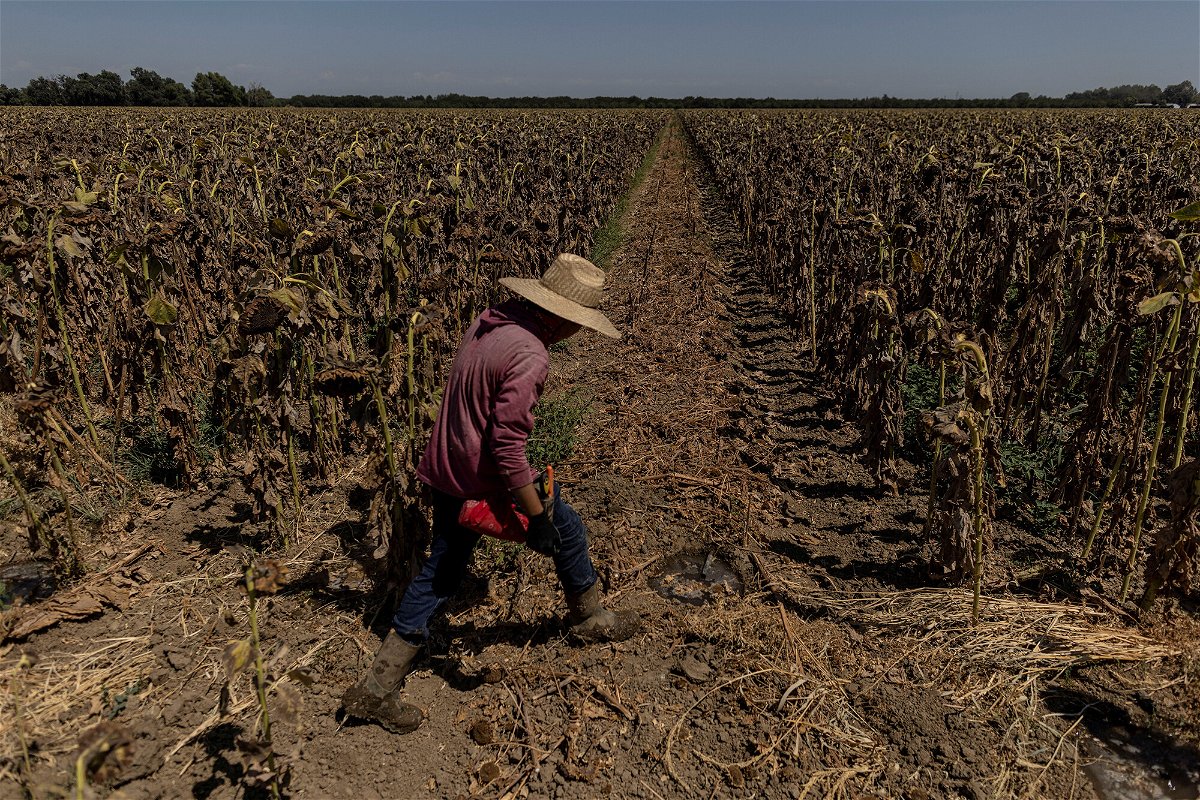 The weather has long been a capricious farm worker, laying waste to fields one year while delivering bountiful harvests the next.

But as extreme weather events increase in frequency or become even more intense, unpredictability increasingly becomes an economic liability.

As the United States continues to struggle with high inflation, the effects of prolonged droughts and extreme weather events could help keep prices under pressure for a long time.

The consumer price index, which measures changes in the prices of a basket of goods and services, showed inflation reached 8.3% in August of the previous year. But food prices rose at an even faster pace, rising 11.4% during that time, according to the Bureau of Labor Statistics.

“The prolonged droughts we are witnessing [present] an increased risk that inflation will stay higher for longer,” said Charlie Dougherty, a Wells Fargo economist who recently co-authored a status report on economic conditions. state of american agriculture.

Severe heat and drought have only compounded problems facing U.S. farmers, including supply chain ripple effects from Russia’s war on Ukraine that sparked a surge prices of inputs such as fertilizers; national labor shortages; and inflation and high energy prices, economists noted.

“When you put all of this together, farmers and ranchers faced extraordinary cost pressures,” Dougherty said. “And those higher costs are passed on to consumers.” Rising food prices are one of the main factors fueling inflation, according to recent CPI data.

The overwhelming majority of fruits, nuts and vegetables come from drought-stricken states like California and Texas, the American Farm Bureau Federation noted in a recent market update.

The drought and its effects “will likely lead American consumers to pay more for these products and either partially rely on foreign supplies or reduce the variety of items they buy at the store,” according to the Farm Bureau. “Drought conditions in the United States are also threatening global access to certain commodities like almonds, as California produces 80% of the global supply.”

While the majority of these specialty crops are holding up, one of the hardest hit crops in California has been rice, according to Aaron Smith, DeLoach professor of agricultural economics at UC Davis.

Rice acreage has fallen 55% this year, Smith said, noting US Department of Agriculture data showing an increase in acres of prevented planting, or land intended for cultivation but prevented by a natural disaster or lack of water.

California, second only to Arkansas in rice production among US states, generates about $900 million worth of rice annually, he said. California is a major producer and exporter of medium-grain rice, found in sushi and risotto dishes. While the decline in acreage represents a major blow to rice production in the United States, the effects could be mitigated by other sources, he said.

“If you look at it from a global perspective, what determines the price of rice, California is not a very big producer compared to the whole world,” Smith said. “The local impact is very important; the global impact and the impact on consumers so far – not that big.

The globalized economy and trade serve as a buffer to some degree, said Josué Medellín-Azuara, an associate professor of environmental engineering at UC Merced who studies climate change adaptation and the economics of agricultural, environmental and urban uses. some water.

“I don’t think we’re food insecure at this point, but it’s really just a reminder that warmer temperatures can bring more challenges to producing many agricultural products that we traditionally see,” he said. he declared. “It is recognized that groundwater supplies will not always be there to help us cope with future droughts, if we don’t use them more sustainably.”

In far western Minnesota, a few miles from the South Dakota border, Anne Schwagerl and her family operate a 400-acre organic farm.

Last year, Schwagerl and other North Star State farmers endured the worst drought in decades. Some of the yields have been halved on his family’s farm, where they grow crops such as corn, soybeans, oats and rye.

This year has brought rain. By mid-June, about 75% of the state had above-average precipitation levels, according to the Minnesota Department of Natural Resources.

“We had a very tough fall harvest and then a wet winter, which was great,” Schwagerl said. “We needed this rain, but it kept coming and we had a very wet late spring. So it was that boosting feeling of knowing that this might change [at] the drop of a hat.

And over the past two years, the intensity of these weather events has only increased, and relatively infrequent weather phenomena like derechos – long-lasting, high-powered windstorms that can crush silos at grains as if they were soda cans – have joined the vernacular, she says.

“2019 was a historically wet year. Throughout the year, we couldn’t miss a rain for love or money,” she said. “2020 was Covid, our first Covid year, where everything was locked down. And then 2021, we went through a once-in-a-generation drought. »

“It’s like you can’t use those words like ‘once in a generation’ anymore because they keep happening. Does that still have any meaning? she added.

Schwagerl worries about what 2023 could bring in terms of input costs, raw material prices and weather conditions.

“We’re riding this endless roller coaster along with everyone else,” she said.

Ariel Ortiz-Bobea, an applied economist at Cornell University working on agricultural and resource economics, is optimistic about private and public sector investments in research and development and other mechanisms to improve productivity and conserve resources. He expressed concern about less developed countries and the effects of world events such as the war in Ukraine.

“If things get hairier politically, these [drought] events become more painful,” he said.

Extreme weather can also negatively affect business results, according to a study by Paul Griffin, professor of management at UC Davis.

Griffin’s research on the effect of heat found that every degree above 77 degrees Fahrenheit (25 degrees Celsius) results in 0.63% lost annualized sales and 0 lower profit margin. .16%. Stock prices fell an average of 22 basis points in response to a heat wave, Griffin found.

“The implication is that if sales go down, companies will have an incentive to raise prices,” he said.

The exact extent to which extreme heat, drought and, more broadly, climate change will play a role in prices and inflation is extremely difficult to estimate, Smith said.

There are many more costs embedded in the price of a product than what consumers pay at the grocery store – including wages, materials, production, processing, transportation, distribution, retail and marketing, he said. According to the Farm Bureau, farmers and ranches receive about 8 cents for every dollar spent on food at home and away.

“All of these costs are far larger slices of the food pie than the actual value of the food produced by the farmer,” he said. “So when we look at food prices and worry about what might drive up food prices, we should probably pay more attention to these processing, transportation and marketing costs rather than what’s happening on the farm.”

Russia’s war in Ukraine helped fuel a sharp rise in oil prices, which spilled over into key inputs such as fuel and fertilizer; and it has complicated already tangled supply chains, further increasing costs for all companies that help put agricultural products on the table.

Still, the very prospect of more extreme weather could further undermine groundwater and limit potential for cultivation in the future, Smith said.

“That’s probably going to mean, in the future, fewer acres of different California-grown fruits and vegetables that people across the country are eating,” he said. “While inevitably, in the long run, prices will go up – maybe not this year, but they will go up.”