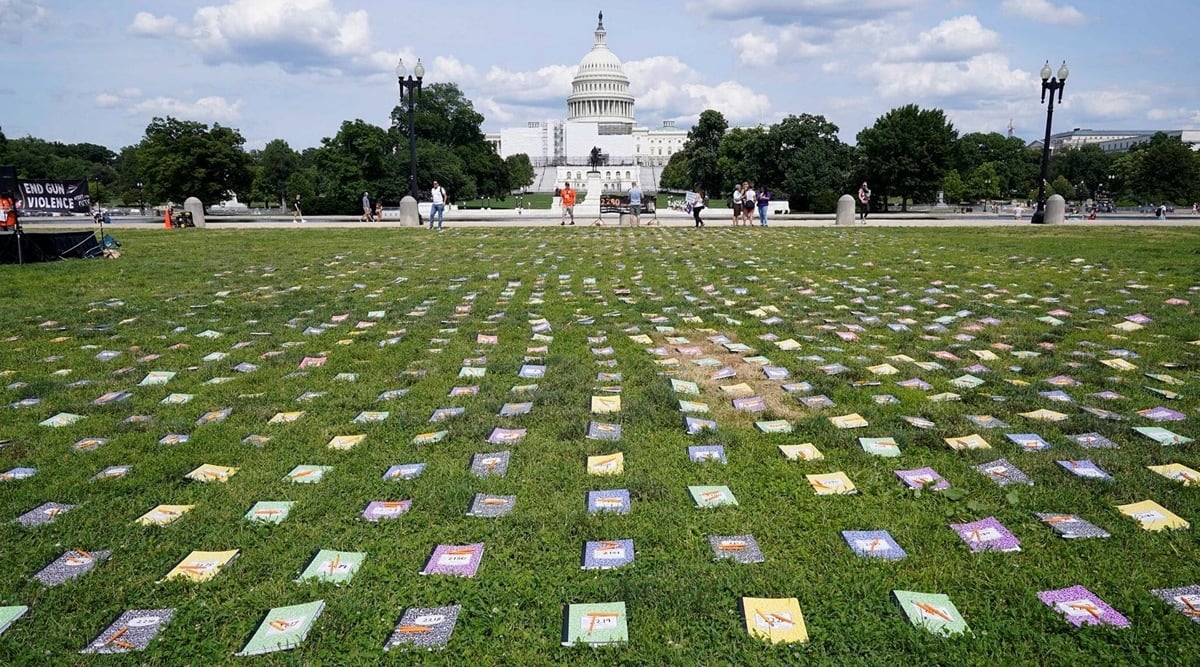 The proposal falls far short of tougher measures long sought by President Joe Biden and many Democrats. Even so, if the deal does result in the enactment of legislation, it would mark a turnaround after years of gun massacres that ended only in a stalemate in Congress.

Leaders are hoping to push through any deal quickly — they hope to do so this month — before political momentum wanes, stoked by recent mass shootings in Buffalo, New York, and Uvalde, Texas.

In a significant development, 20 senators, including 10 Republicans, released a statement calling for passage. That’s potentially crucial because the biggest hurdle to passing the measure is likely to be in the 50-50 Senate, where at least 10 GOP votes will be needed to reach the usual 60-vote threshold for approval.

The best of Express Premium

“Families are scared, and it’s our duty to come together and do something that will help restore their sense of safety in their communities,” the lawmakers said.

The compromise would make juvenile records of gun buyers under 21 available when they undergo a background check. The suspects who killed 10 people at a grocery store in Buffalo and 19 students and two teachers at an elementary school in Uvalde were both 18, and many of the assailants who have carried out mass shootings in recent years have been young.

The deal would offer money to states to implement “red flag” laws that make it easier to temporarily take guns from people considered potentially violent and to bolster school safety and mental health programs.

More people who sell firearms would be required to obtain federal dealer licenses, which means they would have to perform background checks on buyers. Domestic abusers who don’t live with a former partner, like ex-boyfriends, would be prohibited from buying guns, and it would be a crime for a person to legally buy a gun for someone who doesn’t. would not be eligible for ownership.

Negotiators said the details and legislative language would be drafted in the coming days. Congressional aides said billions of dollars would be spent to increase the number of community mental health centers and suicide prevention programs, but other spending figures remained undecided.

Finalizing the deal could lead to further disputes and it was unclear how long that would take. But the parties’ shared desire to demonstrate a response to the recent shootings suggested the momentum towards enactment was strong.

Biden said in a statement that the framework “doesn’t do everything I think is needed, but it does reflect important steps in the right direction, and would be the most important gun safety legislation to be passed by Congress for decades. Given the bipartisan support, “there’s no excuse for a delay, and no reason it shouldn’t pass quickly through the Senate and the House,” he said.

The ad highlighted bipartisan pressure during the election year since 10 black people were killed at a grocery store in Buffalo and 19 students and two teachers were killed at an elementary school in Uvalde. And it came a day after rallies were held across the country demanding gun curbs – with the rally on Washington’s National Mall drawing around 30,000 people.

Still, the deal represents a lowest-common-denominator compromise on gun violence, not a sea change in Congress. Lawmakers demonstrated a new desire to move forward after saying their constituents have shown an increased desire for congressional action since Buffalo and Uvalde, but Republicans still oppose more sweeping measures Democrats want .

These include banning assault-type firearms such as the AR-15-style rifles used in Buffalo and Uvalde, or raising the legal age to purchase them. AR-15s are popular and powerful semi-automatic weapons that can fire high-capacity magazines and have been used in many of the country’s most high-profile massacres in recent years. One of them, the murder of 49 people at the Pulse nightclub in Orlando, Florida, happened six years ago on Sunday.

Democrats also wanted to ban high-capacity magazines and extend required background checks to many more gun purchases. None of these proposals have a chance in Congress.

Underscoring this, the Democratic-controlled House last week approved sweeping bills banning the sale of semi-automatic weapons to people under 21 and high-capacity magazines, and giving federal courts the power to decide when local authorities want to remove firearms from people considered dangerous. Currently, only 19 states and the District of Columbia have red flag laws.