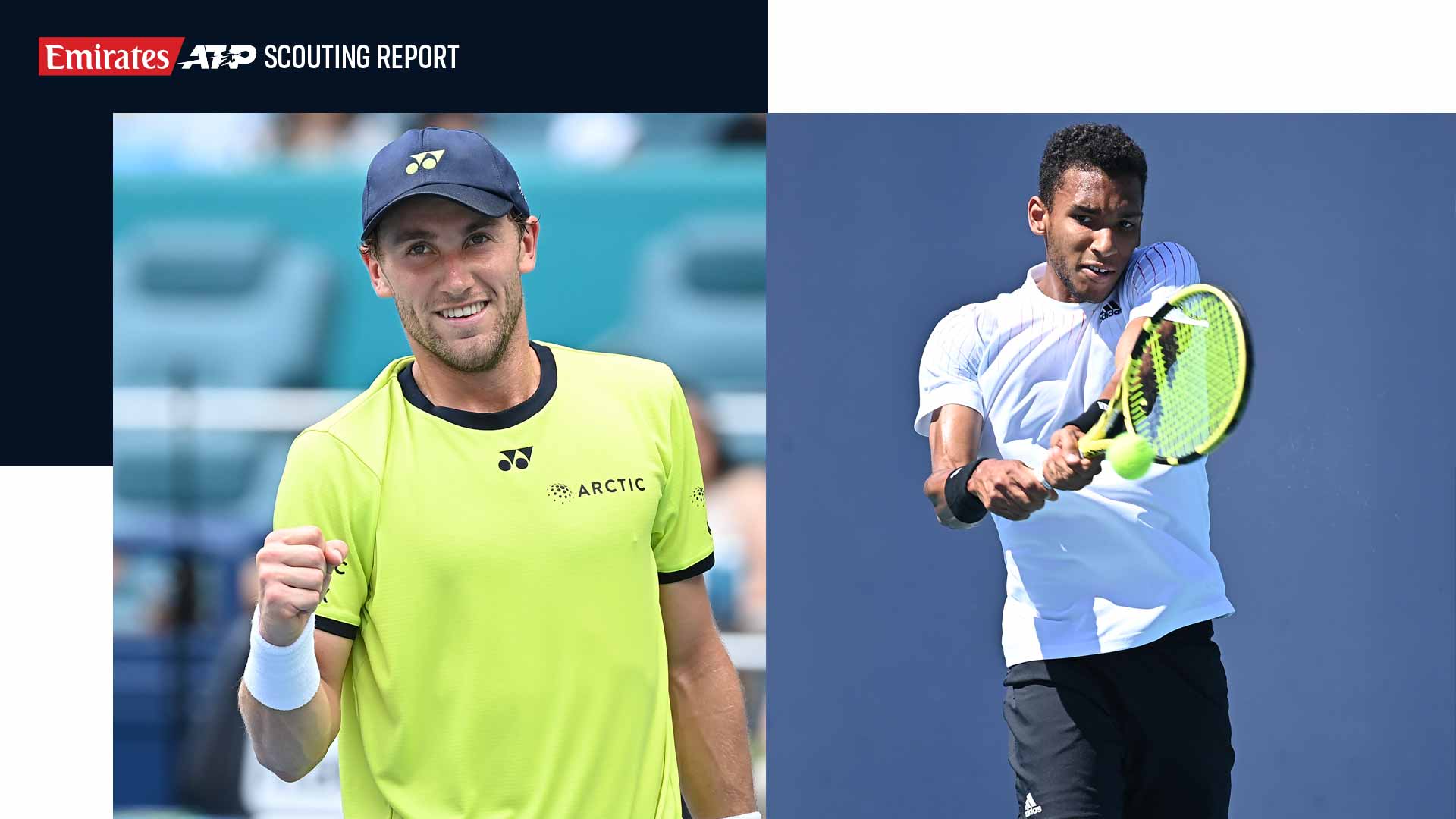 The ATP Tour is moving to clay this week with ATP 250 events in Houston and Marrakech.

Casper Ruud, Reilly Opelka and Taylor Fritz headline the Fayez Sarofim & Co. US Men’s Clay Court Championship in Houston, while Canadian star Felix Auger-Aliassime is aiming for his second title of the year at the Hassan II Grand Prix from Marrakesh. Both tournaments return after a two-year absence due to the Covid-19 pandemic.

ATPTour.com provides five things to look out for at every event.

FIVE THINGS TO WATCH FOR IN HOUSTON
1) Americans are chasing glory at home: BNP Paribas Open champion Taylor Fritz leads a stacked group of home favorites looking for a strong start on clay in 2022. There are 13 Americans in the main draw (not qualifying) and home players make up six of the eight seeds series of the event.

Top 20 stars Fritz and Opelka are chasing a first tour-level final on clay, as is eighth seed Jenson Brooksby. Three former champions from Houston are more experienced on the surface – fourth seed John Isner won the trophy in 2013, Jack Sock triumphed in 2015 and Steve Johnson won back-to-back titles in 2017 and 2018.

2) Will Ruud continue to dominate the clay court? : Casper Ruud has established himself as a force on clay to be reckoned with. The Norwegian’s win at the Argentine Open in Buenos Aires in February was his sixth surface tour-level title since 2020.

Now firmly entrenched in the Top 10 of the ATP rankings, Ruud arrives in Houston top-seeded and will look to make up for his disappointment at the event in 2019, when he was edged out in a three-set final by Cristian Garin. However, Ruud will be confident after qualifying for the Miami final.

3) Garin reigning champion: Chile’s Garin had to wait three years to defend his title, but he will look to claim his second crown in Houston this week. The five-time ATP Tour titlist, who will start his tournament against Sock, has won all his trophies at the clay-court tour level. He hopes to gain momentum after a 3-7 start to the season.

Garin’s compatriot Alejandro Tabilo reached his first tour-level final at the Cordoba Open before upsetting Garin en route to the semifinals of the duo’s home tournament in Santiago. Tabilo is now in the Top 100 of the ATP rankings for the first time and a possible second-round encounter with Fritz could provide some early fireworks for Texas.

4) Kyrgios returns to clay: Nick Kyrgios returned to his best at the ATP Masters 1000 tournaments in Indian Wells and Miami in March. The six-time ATP Tour titlist reached the quarterfinals at the BNP Paribas Open ahead of a fourth round at the Miami Open presented by Itau. The Australian is now trying to transfer his form to clay, a surface he hasn’t played a tournament on since 2019. He opens against American Mackenzie McDonald.

5) Duplicate Ebden/Purcell Top Seeds: After missing out on a first tour-level title together at this year’s Australian Open with a league match loss to Thanasi Kokkinakis and Kyrgios, Matthew Ebden and Max Purcell will be looking to win their first tour-level title. tour together in Houston. Kyrgios will be hoping to derail Ebden and Purcell’s title hopes once again as he links up with Jack Sock, while the second seeds are Lukasz Kubot and Santiago Gonzalez, with Gonzalez aiming for his third ATP Tour title of the season .

FIVE THINGS TO WATCH IN MARRAKECH
1) Felix to bounce back? : Felix-Auger-Aliassime’s meteoric start to 2022 included ATP Cup glory with Canada and a maiden tour-level title at the ABN Amro World Tennis Tournament in Rotterdam. Now, the 21-year-old will try to find better form on clay in Marrakech, where he is seeded.

Auger-Aliassime is taking part in the Hassan II Grand Prix for the first time. The 21-year-old has already proven his ability on the surface, reaching the finals in Rio de Janeiro and Lyon in 2019. He hopes to kick off the next stage of his season when he takes on Moroccan wild card Elliot Benchetrit in the first round.

2) Evans and Goffin for the first title of the year: Second seed Daniel Evans upset Hubert Hurkacz and world No. 1 Novak Djokovic as he made his way to the semi-finals of the 2021 Rolex Monte-Carlo Masters, showing off his prowess on clay. But the Briton couldn’t have asked for a tougher first outing on the surface in 2022 than a first-round clash with three-time Marrakech champion Pablo Andujar.

Another player Evans beat in Monte Carlo last year is David Goffin. The Belgian is also competing in Marrakech, where he will face a qualifier in his opener. The former world No. 7 is 5-8 for the season, with his best run coming in the quarter-finals at the Sydney Tennis Classic in January.

3) Clay court crew: A host of top clay artists seek deep runs on their favorite surface in Marrakech. Fourth seed Albert Ramos-Vinolas clinched a fourth clay-court tour-level title at the Cordoba Open in February and reached the final in Morocco in 2012, when the tournament was held in his former home in Casablanca.

Fifth-seeded Federico Delbonis won the trophy without dropping a set in 2016, while Andujar is the most successful player in tournament history. The 36-year-old Spaniard won the Marrakech tournament in 2018 to add to titles clinched in Casablanca in 2011 and 2012. He was only denied a fourth crown by Benoit Paire in the 2019 league match.

Other experienced dirt players on the pitch include seventh seed Alejandro Davidovich Fokina – the No. 43-ranked Spaniard in pursuit of a first ATP Tour trophy – and Laslo Djere, whose two titles at the tour level include an ATP 500 crown clinched on clay in Rio de Janeiro. in 2019.

4) Trophy time for Musetti? Lorenzo Musetti will be looking to win his first ATP Tour title this week in Marrakech on his tournament debut. The Italian has shown his strength on clay, having upset Stan Wawrinka and Kei Nishikori on his debut at the ATP Masters 1000 in Rome in 2020. He also advanced to the fourth round last year at Roland Garros, where he pushed Djokovic to five sets.

Musetti will need to be at his best early on in Morocco as he faces a tricky first-round task at Ramos-Vinolas. At Indian Wells last year, Ramos-Vinolas beat Musetti in straight sets, albeit on hard court.

5) Golubev/Martin lead doubles draw: Kazakh/French duo Andrey Golubev and Fabrice Martin rekindle a partnership that began with a semi-final at the Qatar ExxonMobil Open in Doha in February. But the top seeds will face many experienced doubles stars in Marrakech.