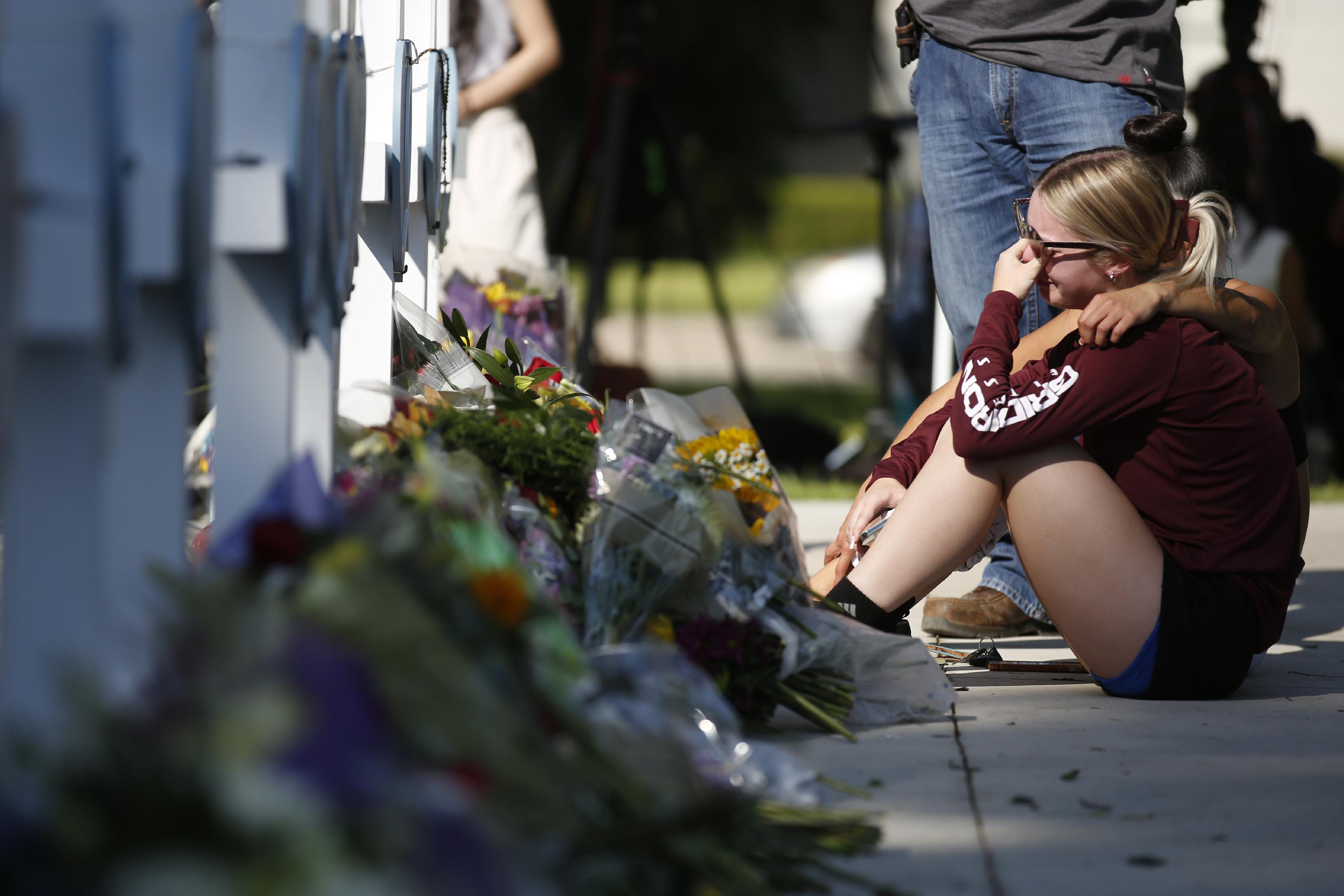 UVALDE, Texas (AP) — Students trapped in a classroom with a gunman repeatedly called 911 during this week’s attack at an elementary school in Texas, including one who pleaded, ‘Please send the police now,’ as officers waited more than an hour to enter the classroom after following the shooter into the building, authorities said on Friday.

The scene commander at Uvalde — the school district’s police chief — believed 18-year-old shooter Salvador Ramos was barricaded in adjacent classrooms at Robb Elementary School. and that the children were no longer in danger, Steven McCraw, the head of the Texas Department of Public Safety, told a controversial press conference.

“It was the wrong decision,” he said.

Friday’s briefing came after authorities spent three days providing often conflicting and incomplete information on the more than an hour that elapsed between the time Ramos entered the school and the time officers from the US Border Patrol unlocked the door to the classroom and killed him.

Three police officers followed Ramos into the building within two minutes. Over the next half hour, no less than 19 officers crowded the hallway outside. But another 47 minutes passed before the Border Patrol tactical team came through the door, McCraw said.

As the shooter fired at students, law enforcement officers from other agencies urged the school’s police chief to let them move in because children were in danger, two school officials said. law enforcement.

The officials spoke on condition of anonymity because they had not been authorized to speak publicly about the investigation.

One of the officials said audio recordings from scene capture officers from other agencies told the school’s police chief that the shooter was still active and the priority was to arrest him.

There was a barrage of gunfire shortly after Ramos entered the classroom where officers eventually killed him, but those gunshots were “sporadic” for most of the time the officers waited in the hallway, McCraw said. He said investigators do not know if any children died during this time.

Throughout the attack, teachers and children repeatedly called 911 for help, including the girl who pleaded for police, McCraw said.

Young survivors of the attack say they pretended to be dead waiting for help.

Miah Cerrillo, 11, told CNN that she covered herself in a friend’s blood to look dead. After the shooter moved into an adjacent room, she could hear screams, more gunshots, and music being played by the shooter. Samuel Salinas, 10, who also played dead, told ABC’s “Good Morning America” that the attacker shot teacher Irma Garcia before shooting the children.

Questions have arisen about how long it took officers to enter the school to confront the shooter.

It was 11:28 a.m. Tuesday when Ramos’ Ford pickup slammed into a ditch behind the low-slung Texas schoolhouse and the driver jumped out with an AR-15-style rifle.. Five minutes later, authorities say, Ramos walked into the school and found himself in the fourth grade classroom where he killed all 21 victims.

But it wasn’t until around 12:50 p.m. that police killed Ramos, McCraw said, when gunshots could be heard during a 911 call from someone inside the classroom. as officers entered the room.

What happened during that time, in a working-class neighborhood near the edge of Uvalde, has fueled growing public anger and scrutiny of law enforcement’s response to Tuesday’s rampage.

“They say they rushed,” said Javier Cazares, whose fourth grade daughter, Jacklyn Cazares, was killed in the attack, and who ran towards the school as the massacre unfolded. unfolded. “We haven’t seen that.”

According to the new timeline provided by McCraw, after crashing his truck, Ramos shot two people exiting a nearby funeral home, officials said.

Contrary to earlier statements by officials, a school district police officer was not at the school when Ramos arrived. When that officer responded, he unknowingly walked past Ramos, who was crouching behind a car parked outside and firing into the building, McCraw said.

At 11:33 a.m., Ramos entered the school through a back door that had been propped open and fired more than 100 rounds into two classrooms, McCraw said. He did not explain why the door was left open.

Two minutes later, three local police arrived and entered the building through the same door, followed soon after by four more, McCraw said. Within 15 minutes, officers from different agencies had gathered in the hallway, taking sporadic fire from Ramos, who was locked in a classroom.

Ramos was still inside at 12:10 p.m. when first deputies from the US Marshals Service arrived. They had run nearly 113 kilometers to school in the border town of Del Rio, the agency said in a tweet on Friday.

But the commander inside the building – School District Police Chief Pete Arredondo – decided the group should wait to confront the shooter, convinced the scene was no longer an active attack, said McCraw.

The crisis ended at 12:50 p.m., after officers used a janitor’s keys to open the classroom door, entered the room and shot Ramos dead, he said.

Arredondo could not be reached for comment on Friday. No one answered the door to his home and he did not answer a phone message left at the district police headquarters.

Governor Greg Abbott, who at a press conference Wednesday praised the police response, said Friday he had been “misled” and was “livid.”

In previous statements, the governor told reporters he was repeating what he was told. “The information given to me turned out to be, in part, inaccurate,” he said.

Abbott said what exactly happened needed to be investigated “thoroughly and comprehensively”.

The governor has previously praised law enforcement for their “incredible courage in running towards gunfire” and their “quick response.”

On Friday, Abbott was scheduled to attend the annual convention of the National Rifle Association, which is held statewide in Houston. Instead, he addressed the gun rights group’s convention via recorded video and traveled to Uvalde.

At the convention, speaker after speaker took the floor to say that changing US gun laws or further restricting access to guns is not the solution.

Former President Donald Trump was among Republican leaders who spoke at the event, where hundreds of angry gun violence protesters demonstrated outside, including some who held crosses with pictures of the victims of Uvalde.

The motive for the massacre – the nation’s deadliest school shooting since Newtown, Conn., nearly a decade ago – remains under investigation. Authorities said Ramos had no known criminal or mental health history.

During the siege, frustrated onlookers urged police to charge into the school, witnesses said.

” Go for it ! Go for it ! women yelled at officers shortly after the attack began, said Juan Carranza, 24, who observed the scene from outside a house across the street.

Cazares said when he arrived he saw two officers outside the school and about five others escorting students out of the building. But 15 or 20 minutes passed before officers arrived with shields, equipped to confront the shooter, he said.

As more parents flocked to the school, he and others urged police to act, Cazares said. He heard about four shots before he and the others were ordered back to a parking lot.

“A lot of us were arguing with the police, ‘You all have to go. You all have to do your job. Their response was, “We can’t do our job because you’re interfering,” Cazares said.

The many chilling details of the attack were enough to leave parents gripped with fear.

Visiting a downtown memorial to those killed, Kassandra Johnson from the nearby community of Hondo said she was so worried the day after the attack that she kept her twin boys home from the school.

Before sending the 8-year-olds away, she studied the school building, determining which windows she would have to break to reach them. And she drew hearts on their hands with a marker, so she could identify them if the worst happened, Johnson said, as she placed flowers near 21 white crosses honoring the victims.

“These kids could be my kids,” she said.

Associated Press reporters Claire Galofaro in Uvalde, Jake Bleiberg in Dallas and Mike Balsamo in Washington contributed to this report.

Read more about the school shooting in Uvalde, Texas: https://apnews.com/hub/school-shootings