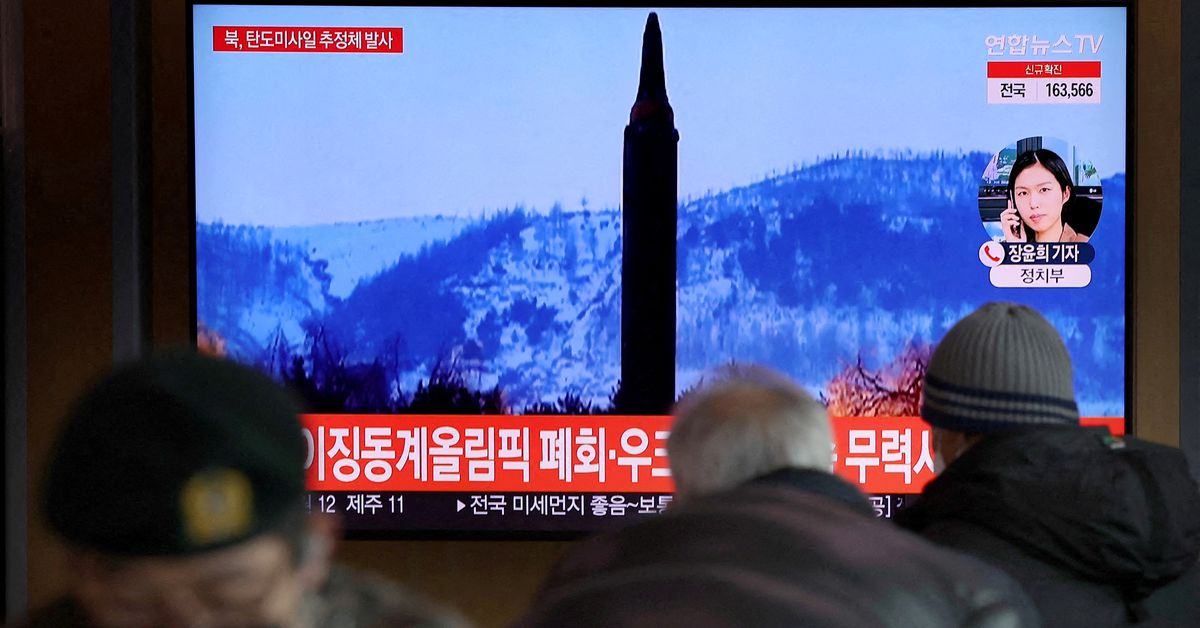 People watch a television file showing footage of a report on North Korea firing what appeared to be a ballistic missile, in Seoul, South Korea, February 27, 2022. Yonhap via REUTERS

SEOUL, March 16 (Reuters) – North Korea’s decision to use the international airport near its capital as a test site for large missiles is “absolutely bonkers” and could be a way for leader Kim Jong Un to to keep a close eye on its most valuable weapons, analysts say.

Debris fell in or near Pyongyang after a failed test fire from the airport on Wednesday, Seoul-based NK News reported, citing unnamed witnesses and a photo of the test showing a ball of smoke tinted red at the end of a rocket launch trail zig-zagging into the sky above the city. Read more

There was no immediate confirmation of damage or casualties.

The launch underscored the danger behind North Korea’s decision to use the airport as a major site to test fire large missiles. The airport is in Sunan, about 17 km (10 miles) northwest of the North Korean capital.

“It’s a very strange airport,” he added. “And it’s getting weirder and weirder all the time.”

Since August 2017, North Korea has conducted an increasing number of major tests from Sunan airport, including a pair of launches on February 27 and March 5 that US officials consider developmental tests for the intercontinental ballistic missile. Hwasong-17.

With the construction of what analysts believe is a ballistic missile support facility, the airport could play a major role as North Korea prepares to potentially conduct its first full-scale ICBM test since 2017.

Even before the COVID-19 pandemic shut down international travel to and from North Korea, the airport was hardly busy, with a handful of flights operating to cities in China and Russia.

But North Korea appears to be the only country to have conducted missile tests from its main international airport and may be considering using the site to develop technology specifically related to its ICBMs, Lewis said.

In 2016, North Korea began building a facility next to the airport that appeared to be for ballistic missiles.

A high-rise building within the facility is tall enough to allow North Korea’s largest ICBMs on launch vehicles to be easily elevated into firing position to allow testing of both, as well as training of launch teams. maintenance and ground support, the U.S. Center for Strategic and International Studies (CSIS) said in a 2020 report, citing satellite imagery.

“The airport is likely favored for its proximity to the capital, potentially allowing Kim Jong Un to witness and observe these launches, without his presence being reported,” said Ankit Panda, senior research fellow at the Carnegie Endowment for International Peace, based in the United States. “Airports also provided large paved areas to safely operate road-mobile launchers.”

The Vienna-based Open Nuclear Network disputed media reports this week that North Korea had built concrete platforms to accommodate the launch of ICBMs at the airport, saying the activity was more compatible with agricultural development.

Wednesday’s failed launch is concerning given the airport’s proximity to Pyongyang, Panda said, noting that in 2017 a Hwasong-12 intermediate-range ballistic missile fired from another location failed after launch. and crashed in a populated area.