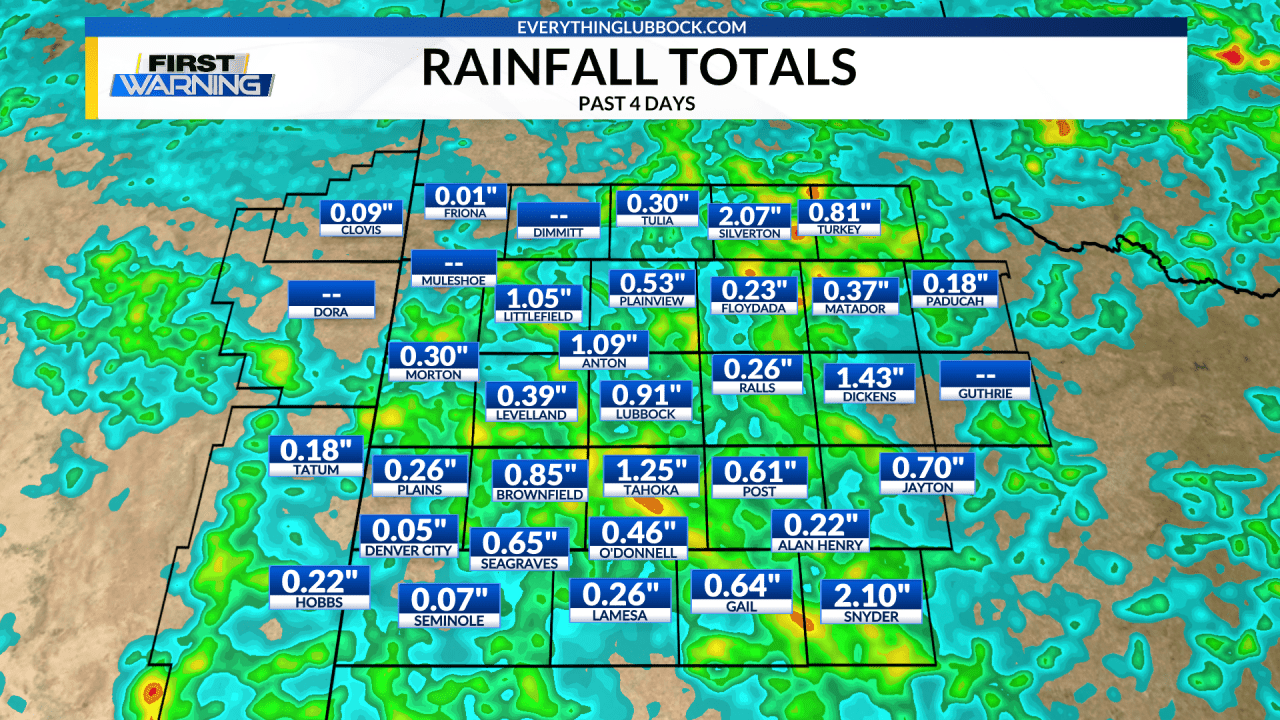 As the showers and thunderstorms begin to subside this evening, some of us are rejoicing at the rainfall we received! Some areas have received more than 2″ of precipitation in the past 24 hours. This is great news for the continuing drought conditions in the KLBK viewing area. We also had quite strong gusts of wind. Our strongest wind gust received was 73 MPH at Anton, and our highest rainfall total as of 9 p.m. Monday night was 1.75″ at Sundown.

In the night from Monday to Tuesday morning, the rain will stop. Low temperatures will bottom out in the low 60s to low 70s under mostly cloudy skies. Winds will be from the north around 10-15 MPH. Some patchy morning fog is expected, so be sure to keep your headlights on low beam and reduce your speed during your morning commute.

Isolated to scattered showers and storms will remain in the forecast Tuesday through Thursday, with the chance of rain becoming lower each day. Fortunately, no widespread severe weather is expected. The best chance of rain will remain over the southern portions of the KLBK viewing area, primarily south of Highway 114 and the Highway 62/82 corridor. Highs each day will warm into the upper 70s to mid to upper 80s, with persistent partly to mostly cloudy skies. Winds will change from north Tuesday to south Thursday. Sustained speeds around 10-20 MPH are expected. Morning lows in the mid 50s to low 70s will remain.

Long term forecast:
Our latest drought monitor update on Thursday should reflect even more improvement in the southern plains. This is excellent news for everyone, but especially for our agricultural producers in the region. Isolated showers and a chance of a storm will remain in the forecast through the weekend. We are not currently expecting any washout, but local heavy rain could occur with the strongest storms. No widespread severe weather is forecast at this time. Highs will remain below average, reaching into the 80s. Morning lows will remain cool, falling in the upper 50s to lower 70s each morning. Winds will remain southeast around 10-20 MPH. You can also expect it to feel a lot heavier throughout.

Have a great Tuesday, South Plains!