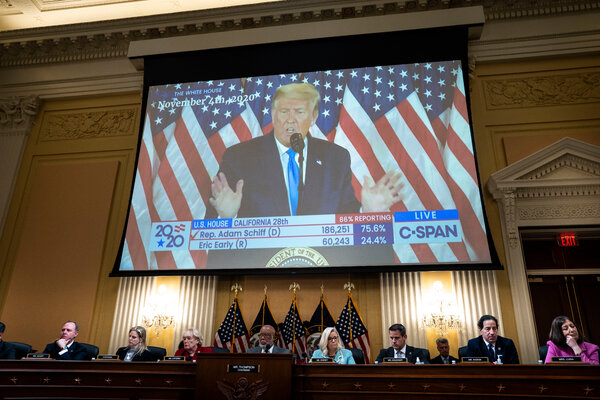 The single big theme of the second day of committee hearings on Jan. 6 was that former President Trump had been repeatedly told — including by his own attorney general — that his “big lie” about a fraudulent election was unfounded. But he made the false claim anyway on election night, and hasn’t stopped since.

As they did in the opening hearing, committee members used video testimony from some of Mr Trump’s closest friends and advisers – including direct comments from former Attorney General William P. Barr – to show that the President must have known that his claims were baseless.

Here are some other takeaways from day two of the hearings.

Trump was described as “detached from reality” after the election.

Mr. Barr’s video testimony was one of the most compelling of the morning, with the former attorney general describing Mr. Trump as increasingly “detached from reality” in the days after the election. In his testimony, Mr Barr said he repeatedly told the president that his allegations of fraud were unfounded, but that there was “never any interest in the actual facts”.

Mr. Trump’s unvarnished portrayal is a critical part of the argument the committee is trying to make: that Mr. Trump knew his fraudulent election allegations weren’t true and made them anyway. Mr. Barr said that in the weeks after the election, he repeatedly told Mr. Trump “how crazy some of these allegations were”.

The committee argues that Mr. Trump was a knowing liar. But Mr. Barr’s testimony offered another possible explanation: that the president came to believe the lies he was telling.

One thing that became clear on Monday was that there were two different groups of people around Mr. Trump in the days and weeks after the election.

A veteran Republican agent, Mr. Stepien was among campaign aides, lawyers, White House advisers and others who urged Mr. Trump to drop his baseless fraud allegations. Mr. Giuliani’s team was fueling the president’s paranoia and pushing him to support unsubstantiated and fanciful allegations of ballot harvesting, tampering with voting machines and more. “We kind of call them my team and Rudy’s team,” Stepien told committee investigators in interviews. “I didn’t mind being characterized as part of the normal squad.”

Committee members hope the description of the two competing groups in Mr. Trump’s orbit is evidence that Mr. Trump made a choice – to listen to the group led by Mr. Giuliani instead of those who led his campaign and worked in his administration. Mr Trump chose, in the words of “Team Normal”, to listen to these “crazy” arguments instead.

A picture emerges from election night at the White House.

Monday’s hearing opened with a vivid portrayal of election night at the White House, depicting the reaction of the president and those around him when Fox News called Arizona for Joseph R. Biden Jr. Using video testimony of the president’s closest advisers and some of his family, the committee showed how Mr. Trump dismissed the cautionary advice he received.

Mr Stepien said in the video that he had urged the president not to declare victory prematurely, having previously explained that Democratic votes were likely to be counted later that night. Mr. Trump ignored it, Mr. Stepien and others said. Instead, he listened to Rudy Giuliani, who aides said was drunk that night, urging the president to claim victory and say the election was stolen.

Chris Stirewalt, the Fox News political editor who was fired after making the on-air call for Arizona, told the committee that the change in returns that night that prompted the president to claim that he manipulated voters was nothing more than the expected results of Democratic votes. counted after the Republicans. He expressed pride that his team was the first to accurately call the Arizona results and said there was “zero” chance Mr Trump won that state.

Millions of dollars were sent to a non-existent “election defense fund”, the committee said.

It wasn’t just the “big lie,” according to the January 6 committee. It was also “the big scam”.

In a video presentation that concluded its second hearing, the committee described how Mr. Trump and his campaign aides used baseless allegations of voter fraud to convince the president’s supporters to send millions of dollars to something called the “Electoral Defense Fund”. According to the committee, Trump supporters donated $100 million in the first week after the election, apparently in the hope that their money would help the president fight to overturn the results.

But a committee investigator said there was no evidence such a fund ever existed. Instead, millions of dollars poured into a super PAC the president set up on Nov. 9, just days after the election. According to the committee, this PAC sent $1 million to a charitable foundation headed by Mark Meadows, its former chief of staff, and another $1 million to a political group headed by several of its former staffers, including Stephen Miller. , the architect of Mr. Trump’s immigration program.

Rep. Zoe Lofgren, Democrat of California, summed up the findings this way: “Throughout the committee’s investigation, we found evidence that the Trump campaign and its surrogates misled donors about the destination of their donations. funds and what they would be used for,” she said. said. “So not only was there this big lie, there was the big scam. Donors deserve to know where their funds are really going. They deserve better than President Trump and his team have done. »