How Journalists Struggle to Cover Threats to Democracy 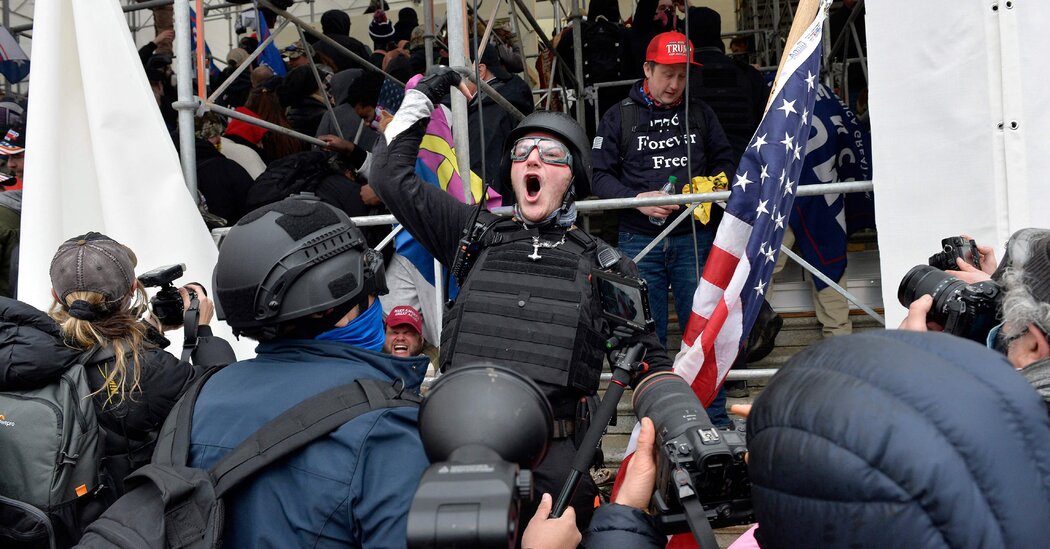 But for reporters, not all stories are as black or white as a mob storming the United States Capitol in an attempt to overthrow a free election. Often there are gray areas.

Gerrymandering is a classic example. It’s not always easy to identify heroes and villains when writing about redrawing ward boundaries. Republicans have had more success with redistricting lately, and they’ve often broken voting rights laws, but both parties manipulate political maps for their own ends. In New York, for example, Democratic lawmakers sought to maximize their House seat count, only to run into a court order dismissing their cards.

So is gerrymandering a fundamental threat to democracy, as some claim? Is it a tool that politicians use to protect their jobs or gain advantage over their rivals? Something in between? Details matter.

There is no manual for all of this, but a group of activists and academics are trying to help.

A new 28-page report from Protect Democracy, a nonpartisan, nonprofit group, offers guidelines for the media to help them distinguish between “normal political jockey” and truly dangerous driving. Its lead author was Jennifer Dresden, a former Georgetown University scholar who has studied democracy around the world.

In an interview, Dresden said she was driven by the belief, backed by decades of research, that “authoritarianism doesn’t happen overnight.” Like a stalagmite, it develops from the slow trickle of attacks on freedoms and breaches of secular democratic rules and traditions. This process is now well under way in the United States, she worries.

The idea motivating the report, Dresden said, was to develop rules for thinking about how to assess whether something is “a systemic risk to democracy” – and expose it as such – or “just canon. coward doing things that are problematic”.

The panel reached consensus on “seven basic tactics” authoritarian leaders and movements use to pursue and maintain power, which are listed verbatim below:

Each bullet is accompanied by its own section, as well as suggestions for journalists to influence their coverage. But the advice is all guided by the overriding question that drove the report: what is politics as usual, and what isn’t?

Dresden says there should be clearer standards than Potter Stewart’s test – referring to the former Supreme Court justice, who said in a 1964 case that his method of identifying obscenity was “I know it when I see it”. There is a certain wisdom in this approach of self-confidence, but democracy is much more complicated than a pornographic film.

Thus, the report contains advice such as “explaining and contextualizing the reasons why the institutions were designed as independent” and “relying on experts who know the history of each particular institution”.

The Trump era has prompted many mainstream news outlets to do just that. At one point, Slate, a left-leaning website that pioneered many aspects of early web journalism, ran a semi-regular feature titled “Is this normal?” which aimed to answer readers’ questions about moves like Donald Trump’s firing of James Comey, the FBI director whose role in the Russia investigation has agitated the former president. (Spoiler alert: that wasn’t normal.)

But all of us in journalism, admittedly, are still figuring out how best to cover what the weight of evidence suggests is an authoritative moment with few parallels in our lives.

As a measure of the challenge, researchers from the Center for Media Engagement at the University of Texas at Austin studied the opinions of 56 people who believed Trump had won the 2020 election. trust unedited video content, their personal experience, their own research and their own judgment than social media and news outlets,” they found.

The Trump era has prompted the Times and other media outlets to take steps to better organize and invest in coverage of democracy and efforts to undermine it.

Its first editor is Griff Witte, a longtime foreign correspondent who said in an interview that his years abroad had given him “fresh eyes” in approaching work.

From perches in London and Berlin, he covered the far-right response to an influx of migrants from Africa and the Middle East, and witnessed firsthand how Viktor Orban, the Prime Hungarian minister, “succeeded in using the mechanisms of democracy against democracy”. to consolidate his power.

“We have January 6, which is very visual and very dramatic,” Witte said, “but you also have a lot of things happening underground that nobody sees.”

New Times editor Joe Kahn has been clear about his view of the paper’s accountability to the public: Times reporters cannot be ‘impartial’ about whether the United States is sliding toward autocracy . As he told NPR’s David Folkenflik in a recent interview, “You can’t engage in independent journalism and be agnostic about the state of democracy.”

The Times approaches this mandate broadly, reflecting the size of the newspaper and the sprawling, global nature of the subject.

Democracy coverage is woven into several parts of the newsroom, including the Politburo, which covers campaigns and elections; corporate and investigative teams, who dig deep into stories that require more than the usual elbow grease; national correspondents across the United States, who cover everything from hurricanes to school shootings to major societal trends; international correspondents, often based in countries without a free press; and the Washington office, which covers the White House, Congress, and federal agencies.

We also need your contribution.

The Times asked readers to tell us about their concerns about the state and future of American democracy, and On Politics will regularly collect articles on this topic from colleagues in the newsroom. Expect to see new guest authors contributing to the newsletter in the coming weeks. And please drop us a line with your thoughts.

What to read about democracy

On Politics regularly features work by photographers from The Times. Here’s what Shuran Huang told us about capturing the image above:

It was a hot day in Union Square near Capitol Hill. Gun violence survivors and families of victims waited to hear from members of Congress at a gun control rally. Many wore red shirts with the words “Moms Demand Action” on it.

People were wiping the sweat from their brows. President Nancy Pelosi finally showed up. As she spoke, I noticed a woman in the crowd raising her hands and clapping at every line Pelosi said.

The speaker pledged that Congress would continue action on guns. “Why would anyone be against raising the age so that teenagers don’t have AK-47s?” she asked. “Why wouldn’t someone want protection in their home so children can’t get dangerous access to guns?”

As Pelosi spoke, the woman’s hands appeared to hold both the speakerphone and the Capitol building in the center of the frame.

Thanks for reading. We’ll see you on Monday.

Is there anything you think we’re missing? Something you want to see more? We would love to hear from you. Email us at [email protected].