Giraffes, parrots and oaks, among many species threatened with extinction | 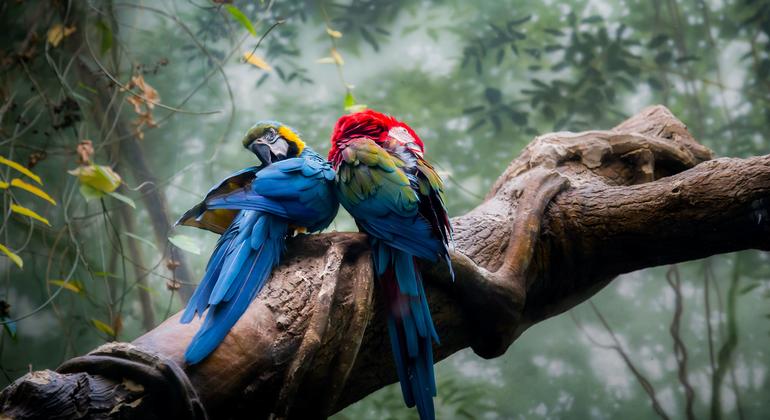 It may come as a surprise to learn that even giraffes, parrots and oak trees are included in the endangered species list, along with cacti and seaweed.

It may come as a surprise to learn that giraffes, parrots, and even oak trees are on the endangered species list, along with cacti and seaweed.
Algae are one of the planet’s great survivors, and the parents of some modern algae date back around 1.6 billion years. Algae play a vital role in marine ecosystems, providing habitats and food for marine life forms, while large varieties – such as kelp – act as underwater nurseries for fish. However, mechanical dredging, rising sea temperatures and construction of coastal infrastructure are contributing to the decline of the species.
The world’s trees are threatened by a variety of sources, including logging, deforestation for industry and agriculture, firewood for heating and cooking, and climate-related threats such as wildfires .
An estimated 31% of the world’s 430 types of oak trees are threatened with extinction, according to the International Union for Conservation of Nature’s (IUCN) Red List of Threatened Species. And 41% are of “conservation concern”, mostly due to deforestation for agriculture and fuel for cooking.
Giraffes are targeted for their meat and suffer from habitat degradation due to unsustainable timber harvesting and increased demand for agricultural land; it is estimated that there are only around 600 West African giraffes left in the wild.

Kelp, a type of seaweed, can be used as animal feed and could help reduce greenhouse gas emissions.

The current biodiversity crisis will be exacerbated, with catastrophic results for humanity, unless humans interact with nature in more sustainable ways, say UN experts.
“The IPBES report shows very clearly that wildlife is an indispensable source of food, shelter and income for hundreds of millions of people around the world,” says Susan Gardner, director of the Ecosystems Division at the United Nations Environment Program (UNEP).
“Sustainable use is when biodiversity and ecosystem functioning are maintained while contributing to human well-being. By continuing to use these resources unsustainably, we not only risk the loss and deterioration of the populations of these species; we affect our own health and well-being and that of the next generation.

The report illustrates the importance for indigenous peoples to be able to secure tenure rights to their lands, as they have long understood the value of wildlife and learned to use it sustainably.
Examples of the types of transformative changes needed to reduce biodiversity loss include equitable distribution of costs and benefits, changes in social values, and effective governance systems.
Currently, governments around the world spend more than $500 billion each year in ways that harm biodiversity to support industries such as fossil fuels, agriculture, and fishing. Experts say these funds should be reallocated to encourage regenerative agriculture, sustainable food systems and nature-positive innovations.