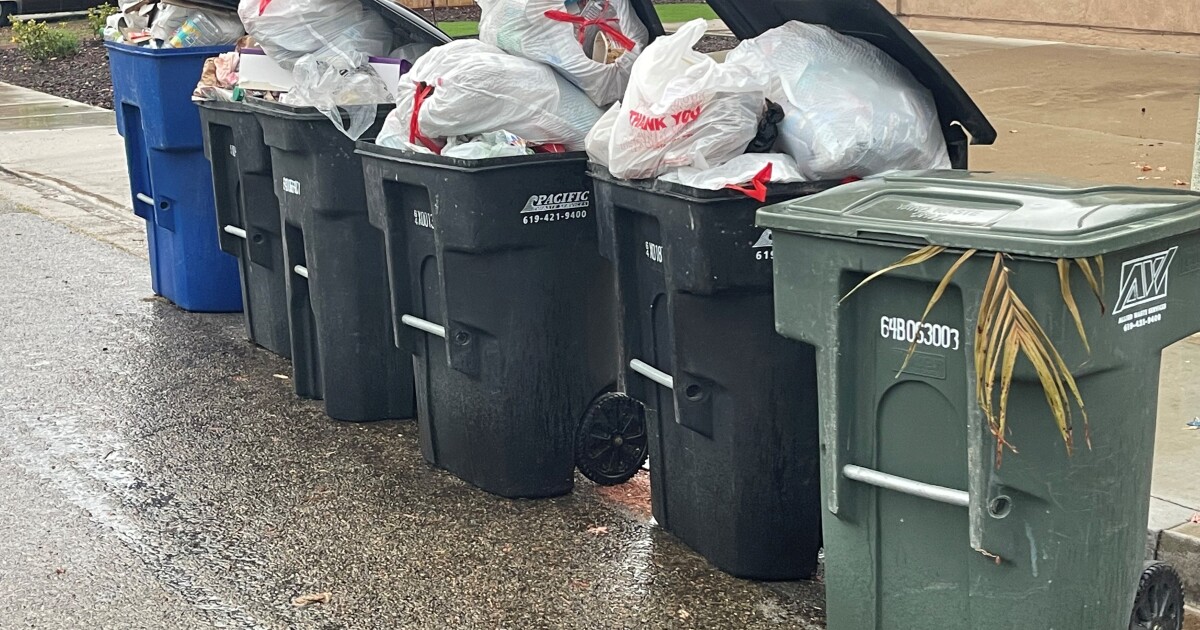 SAN DIEGO, CA (KGTV) – As the rain moves through San Diego County on Thursday, there could be a potential mess on residential streets where trash has yet to be picked up.

In Chula Vista, some homes had bins, recycling bins and garden bins that filled up on Thursday as sanitation workers remained on strike and did not empty containers on regular duty days.

The homes are served by Republic Services, where more than 200 employees have been on strike since last week. Teamsters Local 542 said it was trying to negotiate better wages, working conditions and benefits with the company, but did not reach a deal on Thursday.

A union spokesperson says negotiations between Teamsters Local 542 broke down without any offers being made to employees. The federal mediation and conciliation services have been made aware.

They added that the strike would continue until Friday and Christmas Day until a fair offer is obtained.

“I hope the workers get what they want,” said JT Weary, a resident of Chula Vista. Her garbage was picked up on Tuesday, but her recycling bin is still full.

“It’s just my only recyclable; I can take care of it, take it to the landfill myself if I need to. I support the workers, ”Weary said.

The City of Chula Vista has announced that residents of single-family homes will continue to have their black trash cans picked up on the usual day of service, but not recycling or yard waste bins.

“They came to pick up the blacks on the other side, which is garbage, so they picked it up on Tuesday, but not on our side of the street,” said resident Heidi Castillo.

Castillo pointed out that half of the street has its trash cans empty, while the other half does not.

The town of Chula Vista has told residents and businesses that they can bring their trash, recyclables and yard waste to the Otay landfill on Maxwell Rd free of charge.

Republic Services told ABC 10News that other customers affected by this issue can also use Sycamore’s dump for free, and
“Customers will be invited to present their Republic account invoice to the landfill for free disposal. “

However, some locals, like Castillo, tell us they would rather wait for it to be picked up and hope the striking workers get what they want.

“It’s good for me. I can wait until Tuesday, I don’t have much in it, but a lot of people do,” she said.

“I pay for the garbage service, and they’re supposed to come and pick it up, and I’m not going to take the garbage there, even the recyclables if they want to pick it up. Otherwise, it’s okay until they’ve put their things away.

Republic Services is encouraged by the resumption of negotiations with the union representing our employees in San Diego and we hope to move towards a competitive and fair contract for all. We respect the rights of our employees to engage in the collective bargaining process and continue to bargain in good faith for fair and competitive employment contracts.