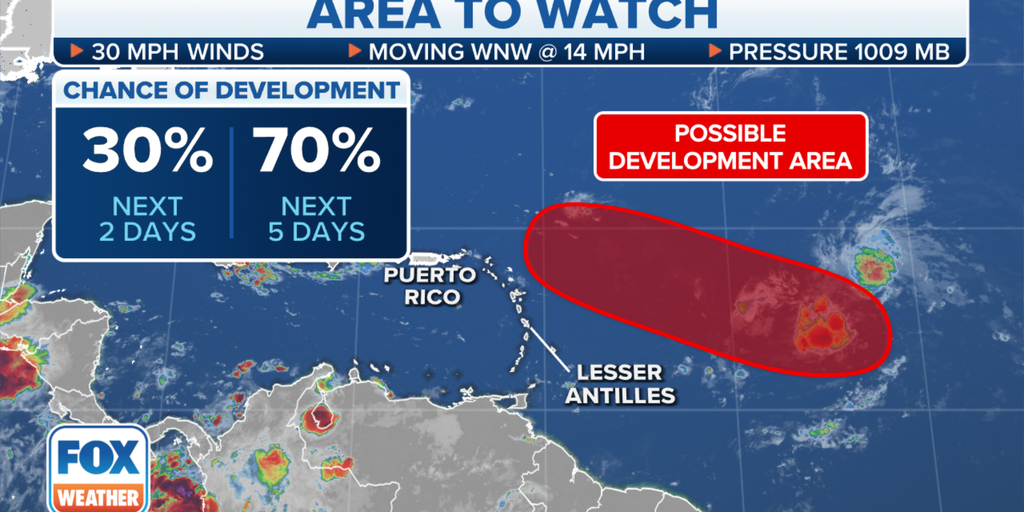 Forecasters are closely watching several disturbances in the Atlantic Ocean for possible tropical development this week.

The FOX Forecast Center is monitoring several tropical disturbances in the Atlantic Basin for possible development over the next few days.

The first disturbance is currently producing minimal shower and thunderstorm activity over the eastern Caribbean Sea. This system is expected to move west-northwestward for the remainder of the weekend, and environmental conditions may become more conducive to slow development as it crosses the central and western Caribbean Sea early. of the next week.

On Sunday, the National Hurricane Center said the tropical disturbance was unlikely to develop over the next five days.

HOW TO WATCH FOX WEATHER ON TV

A tropical disturbance in the Caribbean Sea is being watched for possible development over the next five days.
(FOX Weather)

Far to the east of this system, a tropical disturbance in the central Atlantic is currently producing a broad area of ​​showers and disorganized thunderstorms,

According to the FOX Forecast Center, environmental conditions could favor a gradual development of this second disturbance through early next week as it moves west at 10 to 15 mph across the eastern and central tropical Atlantic. . A second tropical disturbance is being watched as it crosses the eastern and central tropical Atlantic over the next five days.
(FOX Weather)

“Just east of the Lesser Antilles, a cluster of thunderstorms is getting a little more organized under this area of ​​low pressure,” said FOX Weather meteorologist Michael Estime. “And that area of ​​possible development has increased over the next five days.”

Forecasters will no doubt be watching this area of ​​showers and thunderstorms closely.

“Up to a 70% chance we’ll see some sort of tropical system, most likely a tropical depression, that could be named by the middle or end of the week,” Estime said. “It could affect our friends and family in the Lesser Antilles and towards Puerto Rico.”

There are two other areas in the Atlantic Ocean that forecasters will be watching closely.

The bird’s-eye view of the tropical Atlantic.
(FOX Weather)

One of the disturbances is still over Africa, but the National Hurricane Center has given it a slight chance to develop, according to FOX Weather hurricane expert Bryan Norcross.

“It seems like a big system, so it will have a chance to hold dry air,” Norcross said. “Obviously we’ll have plenty of time to watch this disruption.”

Another area of ​​low pressure is rotating over the open ocean east of Bermuda.

“It has a slight chance of becoming a depression in the next few days before being absorbed into a northern weather system,” Norcross said. “It is unlikely to threaten any land area, even if it develops.”

THE 2022 HURRICANE SEASON LATE SCHEDULED: HERE ARE THE IMPORTANT MARKERS TO WATCH

The next system in the Atlantic to become a tropical storm with winds of at least 40 mph will earn the name “Danielle”.