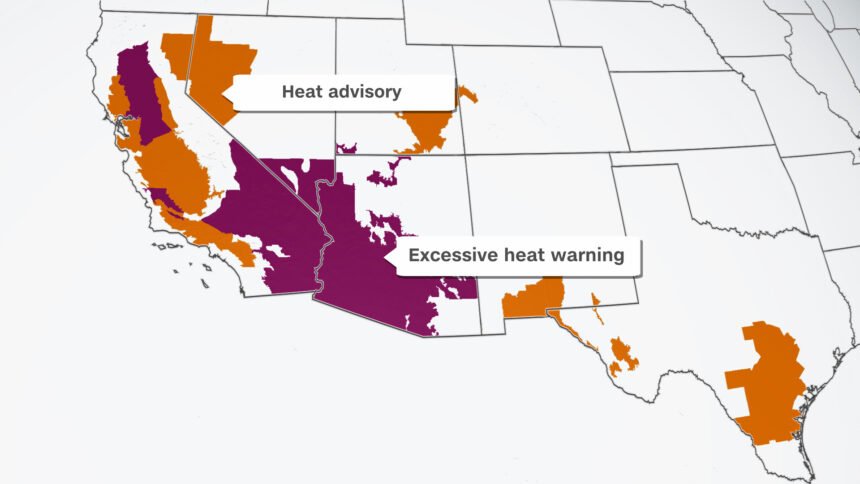 More than 35 million people are under heat advisories or excessive heat warnings from California to Texas as high temperatures peak in the West and spread east over the weekend.

The alerts cover portions of more than half a dozen states as the mercury climbs above the 100 degree mark in many places.

From Sacramento to Houston, records are possible on Friday. In fact, more than 75 cities across the United States could break daily records over the next few days, and even nighttime low temperatures are expected to reach dangerous levels.

The desert is a hot place, but those are extreme levels even for the southwest.

Las Vegas will approach 110 degrees on Friday, more than 10 degrees above normal.

More than 223 million people, around 70% of the lower 48, will see temperatures of 90 or higher over the next week.

Of those 223 million, 45 million, or about 15%, will see triple-digit temperatures over the next week, mostly in California’s Central Valley, the Southwest Desert and Texas.

As the heat retreats from California, it begins to rise further east this weekend. By the time Sunday rolls around, most record high temperatures are expected between Phoenix and New Orleans.

Already this week, Austin and Houston set records on Thursday, but both cities have the potential to break daily temperature records for up to five days in a row before this heat wave finally subsides.

This heat continues to spread through the Midwest and Southeast through early next week, with Chicago peaking in the 90s on Tuesday and Wednesday.

On Monday, most of the record high temperatures will extend between Denver and Raleigh, North Carolina, but could extend as far north as Wisconsin and Michigan by the middle of the week.

Night temperatures can also be dangerous

While daytime highs are expected to hit record highs in some states, nighttime lows are just as significant.

On Friday morning, Phoenix recorded a low temperature – yes, a LOW temperature – of 88. This is a problem because it does not allow the body to cool down successfully at night.

“Your body needs to cool down at night and expects it while you sleep,” says Jenn Varian, a meteorologist at the National Weather Service’s office in Las Vegas. “When we have really hot nighttime temperatures, your body just isn’t able to cool down properly, which in itself (and) can lead to complications, but will also make you less prepared for the daytime heat.”

The temperature must drop to at least 80 degrees for recovery to begin. In fact, a person can lose up to 2 liters of fluid overnight through sweating if the temperature never drops below 85 degrees.

More than half a dozen states will experience morning low temperatures between 10 and 15 degrees above normal through Sunday.

Heat is the number one cause of weather-related death in the United States, and providing guidance on the likelihood of heat-related illnesses – including cramps, exhaustion, strokes and possibly death – helps to protect the public in extreme heat.