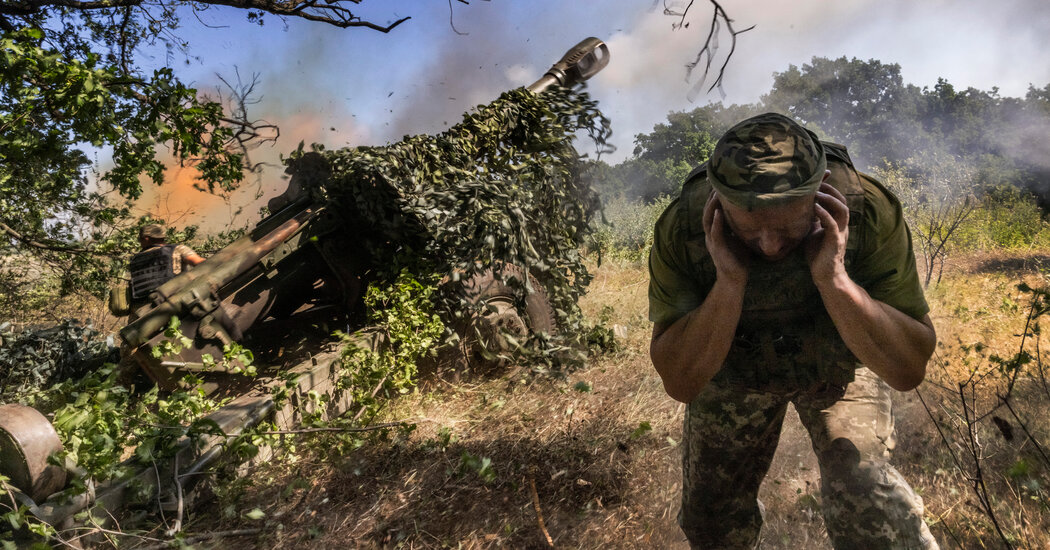 ODESA, Ukraine — Damage from a series of explosions at a Russian air base in Crimea appeared to be greater than the Kremlin described, as officials on the Russian-occupied peninsula declared a state of emergency on Wednesday. emergency and said dozens of homes and commercial structures had been affected.

After Tuesday’s explosions, which a senior Ukrainian military official said were the work of Ukrainian forces, the Russian Defense Ministry moved quickly to minimize the extent of the damage, saying no equipment was destroyed and that no casualties had been reported.

The claims were contradicted by video of the scene and a tally of damage by officials in Crimea, a strategic peninsula in southern Ukraine that Russia illegally annexed in 2014.

Kremlin-installed Crimea leader Sergei Aksyonov said on Wednesday that 252 people had been relocated to shelters due to damage to their homes. At least 62 apartment buildings and 20 commercial structures were damaged in the blast, according to a statement on Mr Aksyonov’s Telegram page, and officials are still listing damage to private homes.

Mr Askyonov declared a state of emergency, apparently in order to speed up the reconstruction process. At least one person was killed and more than a dozen others injured, officials said.

Damage to the base itself was harder to assess, but a video that emerged in the aftermath, and verified by The New York Times, showed the charred nose cone of a fighter jet, its fuselage a black shapeless mass.

Although Ukraine has not officially taken responsibility for the explosions, which set off fireballs that startled beachgoers at a nearby Black Sea resort, a senior Ukrainian military official said Wednesday that the Ukrainian special forces – along with local partisan resistance fighters loyal to the Kyiv government – ​​were behind the blast.

The official said the Saki airbase on Crimea’s west coast was regularly used by Russian warplanes that attacked Ukrainian forces in southern Ukraine. Speaking on condition of anonymity to discuss sensitive military matters, the official did not reveal the type of weapon used in the attack, saying only that “an exclusively Ukrainian-made device was used “.

The explosions are potentially significant because any Ukrainian attack on Russian forces in the Crimean Peninsula would constitute a significant expansion of Ukraine’s offensive efforts. So far, Ukrainian forces have largely focused on pushing back Russian troops from occupied territories after February 24, when their invasion began.

Ukraine has few weapons that can reach the peninsula, apart from planes that would risk being shot down immediately by the heavy Russian air defenses in the area. The air base, which is near the town of Novofedorivka, is about 200 miles from the nearest Ukrainian military position.

Videos verified and reviewed by The New York Times showed a plume of smoke rising from the air base just before at least three explosions: two in quick succession and a third moments later. It is unclear from the videos what caused the explosions.

The senior Ukrainian official did not disclose whether local resistance forces, known as Partisans, carried out the attack or helped Ukrainian military units target the base, as has sometimes happened in other places. territories occupied by Russia.

To hit targets far behind enemy lines, Ukraine has increasingly turned to guerrilla warfare in those territories, officials said. Partisans, for example, helped Ukrainian forces target Russian bases and ammunition depots in the Kherson region, according to Ukrainian officials.

The Russian Defense Ministry said in a statement that the explosion was caused by the detonation of ammunition stored for fighter jets at the base. While the ministry made no speculation about the possible involvement of Ukrainian forces, Mr Aksyonov’s decision to raise the terror threat level to yellow suggested officials were concerned about security on the peninsula.

“This measure is exclusively prophylactic because the situation in the region is under full control,” Aksyonov said on Tuesday.