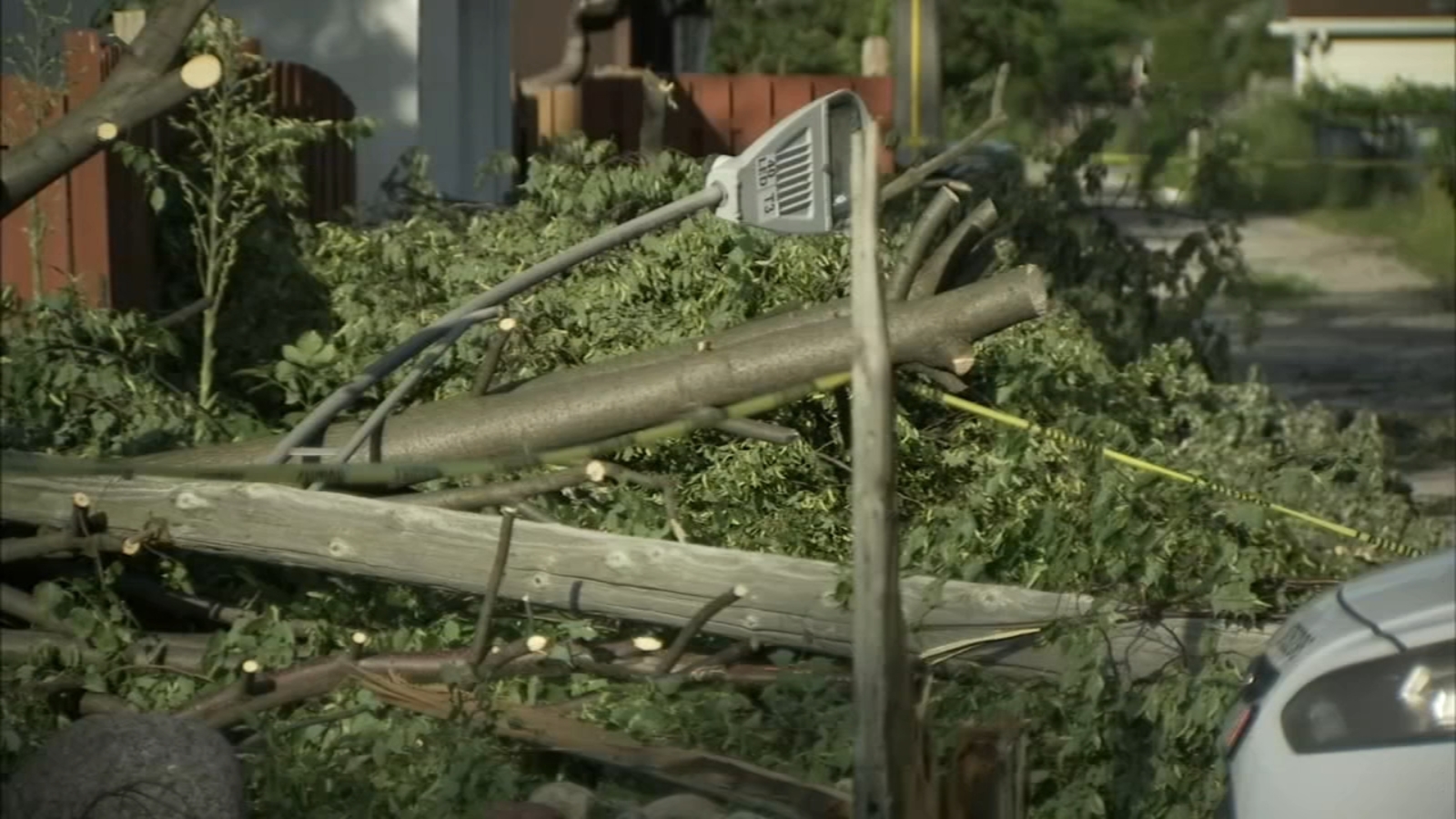 CHICAGO (WLS) – For a third day in a row, some people are waking up without power, as the oppressive heat continues in the Chicago area.

There were more storms from Wednesday evening to Thursday morning which caused even more power outages for ComEd customers.

Scattered thunderstorms dropped about two-tenths of an inch of rain in O’Hare. The storms prompted the weather service to issue warnings across the region.

As of 4 a.m. Thursday, 5,400 ComEd customers were without power throughout the system. It’s down from a height of 125,000 without power after Monday night thunderstorm left a trail of damage.

The majority of those offline are in the southern region due to the most recent storms.

Two hundred of those customers are from Monday’s storms, mostly in Maywood and Broadview.

ComEd crews are working around the clock to restore power to homes and businesses.

“We’ve had more intense and worse storms in terms of impact. But restoring through this intense heat, it changes the dynamics of it,” said ComEd vice president of government affairs Michael Fountain.

The mayor of the western suburb of Broadview has declared a “local state of emergency” after the village was left with downed trees and power outages.

The disaster declaration would make the community eligible for government funding to help with the cleanup.

Wednesday was another hot and difficult day for many due to a Excessive heat warning, but cooler temperatures are on the way.

It’s still expected to hit the low 90s on Thursday, but the region is expected to cool down over the weekend before warming up again next week, said ABC7 Chicago meteorologist Greg Dutra.

Chicago set a new heat record on Wednesday: O’Hare Airport reached 96 degrees around 3 p.m., breaking the June 15 record of 95 degrees set in 1994, according to the National Weather Service.

But it was even hotter at Midway Airport, which peaked at 99 degrees around 5 p.m.

The heat wave began on Tuesday, when temperatures at Midway Airport hit 100 degrees for the first time since 2012. At O’Hare on Tuesday, temperatures soared to 96 degrees at 2 p.m., falling within a few degrees of the June 14 record of 99 degrees set in 1987. Official temperature records for the city are measured at O’Hare.

Drivers need to be vigilant during the heatwave as even the roads are feeling the pressure.

The Chicago Office of Emergency Management and Communications issued tips for staying safe Tuesday morning, ahead of the heat wave.

“Keep electric lights off or off, minimize use of your oven or stove, wear loose, lightweight cotton clothing, take cool baths and showers. Do not allow anyone, including pets, in a car parked, even for a few minutes,” said Rich Guidice, executive director of the Office of Emergency Management and Communications.
The city is reminding people to take precautions to avoid extreme heat emergencies.

Officials warn that hot temperatures and high humidity can cause heat-related illnesses, which could develop within 30 minutes after strenuous outdoor activity.

Residents are advised to take extra precautions, including drinking plenty of fluids, staying in air-conditioned areas and staying out of the sun. If possible, reschedule strenuous activities for early morning or evening if you are working or spending time outdoors. Also wear light, loose clothing when possible.

“Do not underestimate the health risks of heat and humidity. They are dangerous and in some cases can be fatal,” said Dr Jennifer Seo, chief medical officer at the Department of Public Health. from Chicago.

Know the signs and symptoms of heat exhaustion and heatstroke.

Anyone overwhelmed by the heat should be moved to a cool or shaded area, officials said. Heatstroke is an emergency and 911 should be called.

Residents who need help during the extreme heat should call 311. Residents can also request a health check by downloading the CHI311 app, visiting 311.chicago.gov or dial 311.

They also recommend checking on relatives and neighbors.

“We are partnering with the Buildings Department on 311 and responding to calls for senior wellness checks and senior heat assistance. This is a priority for Chicago,” said Alisa Rodriguez, under -Chief Commissioner of the Department of Family Services and Support. .

Chicago has six cooling centers, open 9 a.m. to 5 p.m., Monday through Friday (excluding the Garfield Center, which is open 24 hours):

During business hours, residents can find relief at any of the Chicago Public Library’s more than 75 locations and more than 31 Chicago Park District pavilions as well as 176 wading pools.

However, public pools are still closed as the Chicago Park District works to hire more lifeguards.

Last month, during a spring heat wave, three women were found dead in a Rogers Park seniors’ apartment building where other residents said they had begun complaining to the management of oppressive heat conditions a few days earlier.

Authorities are also reminding people never to leave young children or pets unattended in vehicles under any circumstances.

WATCH: Families battle the heat at the aquatic center

Sun-Times Media contributed to this report.