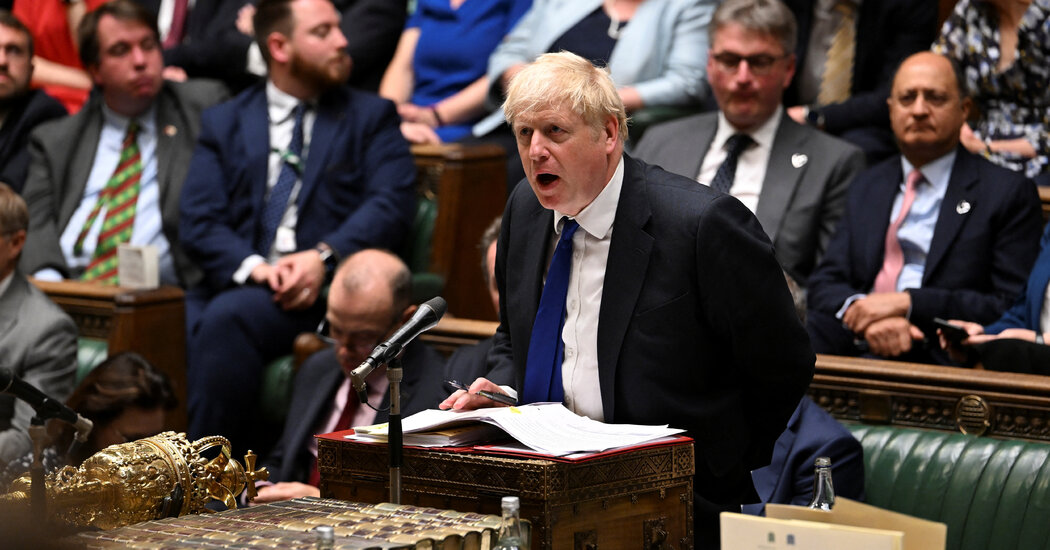 This latest scandal, involving a Deputy Whip in Parliament accused of sexual misconduct, is just one in a long and tiresome series of self-inflicted troubles befalling Prime Minister Boris Johnson’s government.

And his response to that – his initial assertion that he had been unaware of any official complaints against the official, Chris Pincher, followed by a series of painful revelations and finally the admission that in fact he had always known – was the Johnson manual.

Mislead, omit, obscure, bluster, deny, hijack, attack – the prime minister’s plan for dealing with a crisis, say his critics, almost never begins and rarely ends with simply telling the truth. Instead, he tends to start with denial, through several tentative admissions in which his earlier lies are recast as honorable efforts at transparency, and then ending with a grand display of remorse in which he appears to take responsibility. of what happened while suggesting that it was not his fault.

Consider how Mr Johnson weathered the scandal before this one, at boozy parties at 10 Downing Street and other government offices in breach of the strict Covid lockdown rules his government had imposed on the rest of the country. Like a defense attorney keeping all his options open in court, Mr Johnson deployed a series of often contradictory statements to explain ‘Partygate’, as it was known.

When it became clear there had been a second party, in the garden, and that he had indeed attended, Mr Johnson’s spokesman initially said the Prime Minister had not been informed in advance that a rally would take place.

Mr Johnson himself said he knew about the party but had mistakenly believed it was a ‘business event’. Then, echoing Bill Clinton’s famous “I didn’t inhale” explanation when he was accused of smoking weed at Oxford, the Prime Minister said that in any event, he doesn’t only stayed 25 minutes.

“No one told me what we were doing was against the rules,” he said. “When I walked out into that garden, I thought I was attending a business event.”

After that, evidence from a myriad of other parties began to pour into the newspapers so profusely and quickly that it began to seem like not a day had passed without No 10 staff doing party at night. There was one in which Mr Johnson was pictured with members of staff, draped in tinsel and wearing a Santa hat, and another which turned out to be a birthday party thrown for him, complete with cake .

Mr Johnson continued to repeat, in various ways, that he knew nothing of anything, that if he had known he would not have gone, that people had to work and sometimes they did when the wine was present , and that, to the best of his knowledge, no rule has been broken.

He ended up paying a fine for breaking Covid regulations, along with his wife and 81 others, after police opened an investigation into 12 of the parties.

Mr Johnson then went into complete contrition mode and seemed to believe (correctly, as it turned out) that his apology would be enough to see him through the last difficult period.

After new details emerged of a seven-hour party in Downing Street the night before the Duke of Edinburgh’s funeral – a funeral which his widow, the Queen, sat alone because of Covid restrictions – Mr. Johnson said he was very sorry.

‘I deeply and bitterly regret that this happened,’ Mr Johnson told the House of Commons. He added: “I can only renew my apologies to both Her Majesty and the country for the errors of judgment that have been made and for which I take full responsibility.”