At least 19 dead, including 9 children, after dozens injured in New York fire: officials 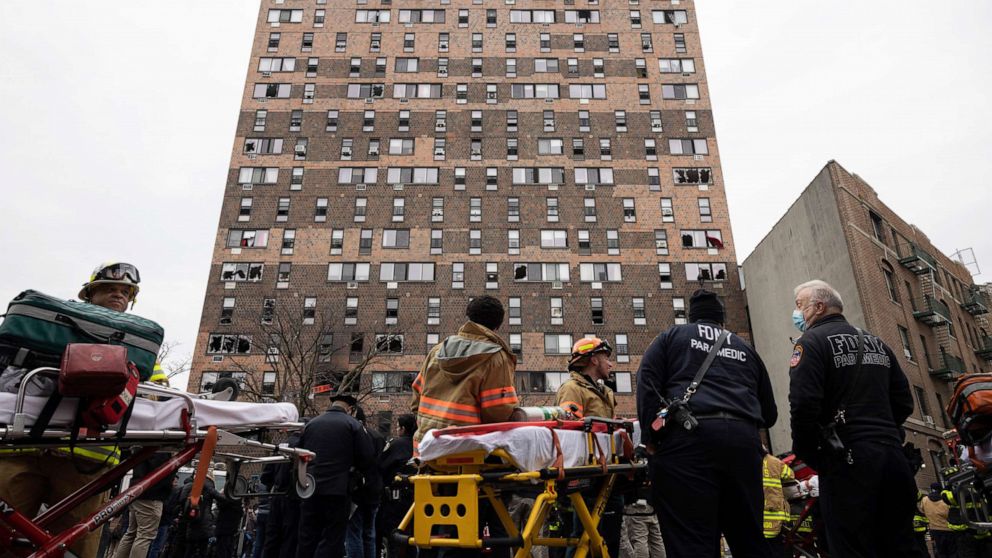 At least 19 people have died, including nine children, in a massive fire in New York on Sunday, officials said.

More than 200 firefighters responded to the scene of the five-alarm blaze that started Sunday morning in a duplex apartment on the third floor of a high-rise building, located in the Tremont section of the Bronx, officials said. . More than 60 people were injured in the blaze, according to New York firefighters.

About 13 people are in Bronx hospitals with life-threatening injuries, officials said.

Many of the injured victims were on the upper floors and were likely suffering from severe smoke inhalation, New York City Fire Marshal Daniel Nigro said at a press conference on Sunday afternoon. The fire never left the hallway on the floor where it started, Nigro said.

The 19-story building was constructed in 1972 and has 120 units, according to city records.

The fire started due to a malfunction of the electric heater in a bedroom, the FDNY announced on Sunday evening. The smoke alarms were working and how the smoke moved so far and quickly is being investigated.

Guillermo Sanchez, a resident who lives on the 16th floor, was making breakfast when he started to smell the smoke, he told ABC News.

“My son went to the door,” he said. “We opened the door. The smoke came in immediately, so we closed the door.”

The smoke was so intense that Sanchez said he assumed it was from another apartment on the same floor.

Sanchez, moved by the ordeal, said he and his son called 911 but felt they could not safely use the stairs to exit the building, he said, adding that ‘they would call family members to tell them they might not.

The firefighter who knocked on his door first said everything was under control, but another firefighter who came half an hour later said: “You have to come with us,” Sanchez said.

Firefighters arrived at the scene within three minutes of the initial 911 call and were confronted with a fire in the hallways, Nigro said. A door left open allowed the fire and smoke to spread, Nigro added, calling the blaze “unprecedented”.

“This will be one of the worst fires we’ve seen here in modern times in New York City,” New York City Mayor Eric Adams told reporters on Sunday.

Adams praised first responders, saying many of the firefighters’ oxygen tanks eventually became empty, but “they still went through the smoke.”

Dramatic images posted on social media show a fire erupting from several windows in the building. The FDNY began receiving calls from several residents on the upper floors just before 11 a.m.

The fire has since been extinguished. Further details, including the conditions of the other victims, were not immediately available.

The residents consisted of a largely Muslim and Gambian population and will be assisted by the city with particular attention to cultural needs, Adams told ABC News.

New York Governor Kathy Hochul appeared at the press conference, saying she spoke to a mother who lost her entire family to the fire, telling the victims: “We will not forget you. We will not abandon you. “

The Bronx Park Phase III Preservation LLC, the name of the joint venture that owns the building at 333 E 181st St., said in a statement that it was “devastated” by the tragedy that occurred.

“We are devastated by the unimaginable loss of life caused by this profound tragedy,” the statement read. “We are cooperating fully with the fire department and other agencies in the city as they investigate his cause, and we are doing all we can to help our residents. Our hearts go out to the families and friends of those who have lost their lives. or have been injured, and we’re here to support them as we recover from this horrific fire. ”

It was the second major fire in the Bronx over the weekend. A four-alarm fire in the Fordham Heights section of the Bronx that started early Saturday morning injured a firefighter and displaced three families, ABC New York WABC station reported. A lithium-ion battery started the fire, officials said.

Last week, a fire on the second floor of a Philadelphia townhouse killed 13 people, including seven children.