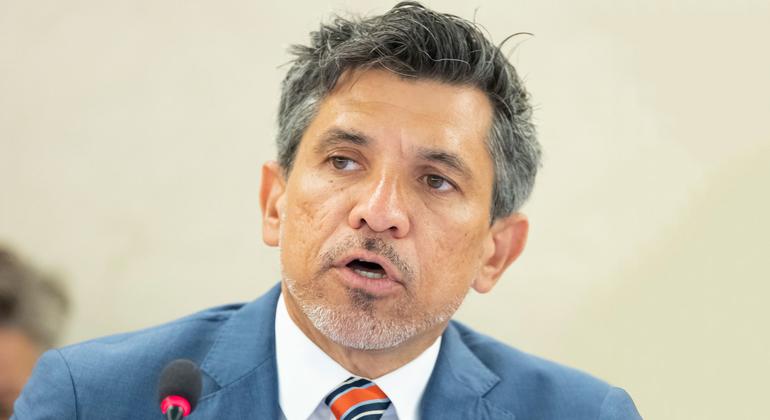 This criminalization has measurable consequences in terms of public health and access to education, says Victor Madrigal-Borloz, the UN’s independent human rights expert on protection against violence and discrimination based on on sexual orientation and gender identity.

Created by the Human Rights Council in 2016 by a majority of States concerned about victims of violence and discrimination based on their sexual orientation or gender identity, the expert mandate has been entrusted since 2017 to Mr. Madrigal-Borloz, a Costa Rican-born lawyer and professor at Harvard Law School.

In an interview with the United Nations Office at Geneva (UNOG), Madrigal-Borloz said he was advocating for a world without the criminalization of sexual orientation and gender identity, including the elimination conversion therapies.

For example, Madrigal-Borloz says that criminalization results in “LGBT youth dropping out of school three times more than non-LGBT people, or trans people contracting HIV/AIDS 47 times more than men homosexuals – and even 76 times more”. than the general population.

The reason for this gigantic discrepancy, he points out, is that too often a trans person who is sick will not seek health services for fear of being ridiculed and will not receive the care they really need.

Moisés Maciel da Silva, 19, from São Paulo, Brazil, discovered he was living with HIV when he was 18 years old.

The criminalization of different sexual orientations or gender identities is also linked to “conversion therapies”, the subject of a 2020 report by Mr Madrigal-Borloz.

The expert appointed by the Human Rights Council addressed the issue of such “therapies” which seek to change a person’s sexual orientation or gender identity, based on the supposed principle that LGBT people and transgender people are “sick”.

The report indicates that these therapies are practiced in at least 68 countries on all continents; the report cites countries in Africa, China, the Republic of Korea and states in Eastern Europe.

In the United States, an estimated 700,000 lesbian, gay, transgender, or transgender people have been subjected to these practices at some point in their lives. In Switzerland, according to estimates by civil society organisations, around 14,000 people are affected.

The evolution of families gives rise to necessary political changes. Sao Mimol hugs his partner in Cambodia at an LGBT Pride event.

A kind of torture

“Conversion therapies” cause deep physical and psychological trauma to lesbian, gay, bisexual, transgender and transgender people of all ages who are victims of these practices, he says.

So much so that the UN mechanisms against torture have judged that these practices could amount to acts of torture or cruel, inhuman or degrading treatment.

The role of the Independent Expert is not only to make observations but also to advise the States on the corrective measures to be taken. And, in light of the suffering caused by conversion therapies, Mr. Madrigal-Borloz explicitly recommends that states ban these practices, repealing the laws that authorize them as well as those that criminalize the diversity of sexual orientation and gender identity.

During a sharing meeting organized by a Chinese NGO True Self, Mama Xiaoli talks with other parents of LGBT children.

Indeed, efforts against conversion therapies have accelerated in recent years, notably with their banning by the parliaments of Canada and France, in 2021, after similar moves in Germany and Albania, for example.

In Switzerland, the cantons of Vaud and Geneva have recently launched initiatives along the same lines, in parallel with the submission of two initiatives to the lower house of the federal parliament.

That said, Madrigal-Borloz cautions against attempts by states to not only avoid banning conversion therapies, but actually promote them.

For example, Ghana is considering a law that would punish anyone suspected of being LGBT+ with five years in prison and explicitly allow conversion therapy. Along with nine other human rights experts, Mr. Madrigal-Borloz wrote to the Head of State of Ghana to draw his attention to the fact that the law constituted “a fundamental departure from the State’s international obligations” and giving him “examples of the pernicious effects the law would have on people living in Ghana – including the unimaginable suffering that conversion therapy would cause”.

WellDonna Taiz Coelho stands up for her rights on the streets of Rio de Janeiro. The sticker on his chest reads “Stop Killing Us”.

Madrigal-Borloz says he will continue to work on the issue of conversion therapies. In particular, he says, it will be important to sensitize religious organizations to the need to unequivocally condemn such therapies.

Mr. Madrigal-Borloz will continue his work to eliminate violence and discrimination based on sexual orientation and gender identity until 2023.

A coalition of no less than 1,327 organizations in 161 countries supported renewing the mandate in 2021, with only a minority of Human Rights Council member states opposing it.

“The mandate must continue until it can be said, objectively, that there is no discrimination or violence based on orientation and gender identity. I’m not sure to see it one day in my lifetime. But we are moving forward decisively,” says Madrigal-Borloz.

The mandate of the Independent Expert on protection against violence and discrimination based on sexual orientation and gender identity is one of 45 “special procedures” mandates appointed by the Human Rights Council .

Mandate holders – special rapporteurs, independent experts and members of working groups – are considered the “eyes and ears” of the Council. They report and advise on human rights situations from a thematic or national perspective. They are not United Nations staff and do not receive a salary for their work.