A pride marked by celebrations, arrests and mourning around the world 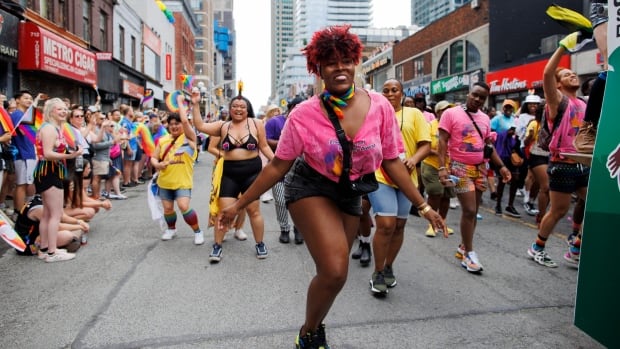 After a pandemic hiatus, Pride events returned to many cities around the world on Sunday.

The streets were once again filled with celebrations and parades, but many more took place in radically different moods.

Here’s a look at how Pride was marked around the world:

The Toronto Pride Parade returned on Sunday after a two-year hiatus from COVID-19.

The city’s downtown was filled with tens of thousands of revelers and attendees. The festivities are expected to continue well into the night, with outdoor concerts planned along Church Street in the gay village.

Sherwin Modeste, executive director of Pride Toronto, says it’s the crowning event of the weekend festival and the culmination of months of planning.

Parades, demonstrations in the United States

Thousands of people – many wearing Pride colors – lined the parade route through Manhattan, cheering as floats and marchers passed.

New York’s first Pride March, then called the Christopher Street Liberation Day March, was held in 1970 to mark the first anniversary of the Stonewall Rebellion, a spontaneous street uprising sparked by a police raid on a Manhattan gay bar .

That spirit of protest was alive again on Sunday, with many parade participants drawing attention to abortion rights following the U.S. Supreme Court’s decision on Friday to overturn Roe v. Wade, a landmark 1973 ruling that had guaranteed constitutional protections for abortion in the country for nearly 50 years.

In San Francisco, some marchers and spectators held up signs condemning the court’s decision on abortion.

US House Speaker Nancy Pelosi, who was riding in a convertible holding a gavel and a rainbow fan, said the high turnout was an acknowledgment that Americans support gay rights.

San Francisco’s first march took place in 1972 and has been held every year since, except for the last two years of the COVID-19 pandemic.

In Chicago, Mayor Lori Lightfoot – seen second from left in the first photo below – called the higher court’s decision a “momentary setback” and said Sunday’s events were “an opportunity for us not only to celebrate pride, but also to be resolute for the fight.”

“We will not live in a world, not in my city, where our rights are taken away or nullified,” said Lightfoot, Chicago’s first openly gay mayor and the first black woman to hold the office.

Dozens of people have been arrested in central Istanbul after city authorities banned a Pride march.

Turkey was previously one of the few Muslim-majority countries to allow Pride marches, but the country’s largest city has banned the march since 2015. Large crowds nevertheless gather each year to mark the end of the month of Pride. pride.

Organizers said more than 100 people were arrested on Sunday. Footage on social media showed people being searched and loaded onto buses.

Norway’s prime minister, pictured in the first photo below, and members of the royal family joined mourners at a memorial service for the victims of a shooting as the capital held its annual Pride festival .

A gunman opened fire on Saturday morning in the nightlife district of central Oslo, killing two men and injuring more than 20 others in what Norwegian security services called an “Islamist terrorist act”.

The Capital Pride Parade was due to take place on Saturday but was cancelled. Police investigators said it was unclear whether hatred of people based on sexual orientation and gender identity motivated the attack.

Requests for inclusion in India

Alongside the celebrations, demands for inclusion were seen at a pride parade in the southern Indian city of Chennai.

Matrimonial rights, the right to adopt, the right to own property and better surrogacy laws were among the demands of participants.

Same-sex relationships are considered taboo by many in socially conservative India, and while they no longer carry the previous penalty of up to 10 years in prison, other rights such as gay marriage risk turn out to be elusive.